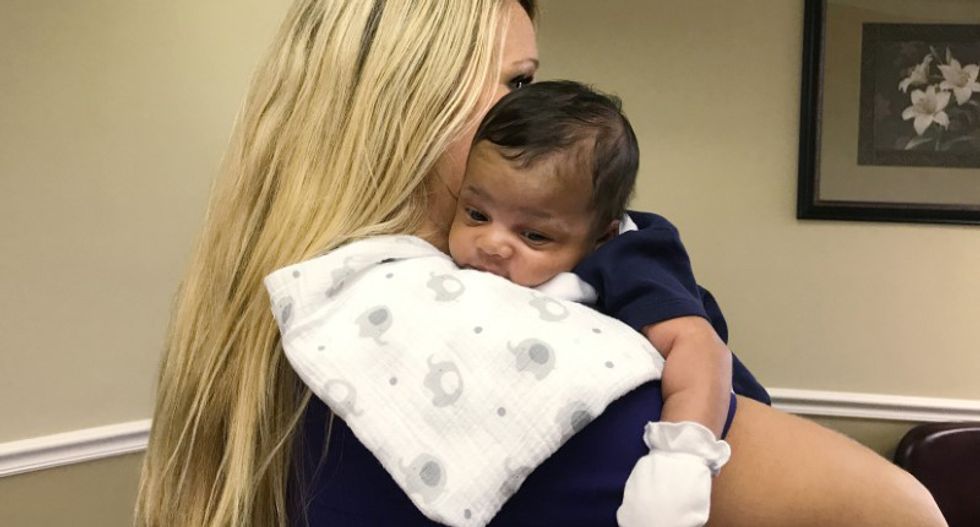 But she has adjusted her approach since arriving last year at the 70-bed North Baldwin Infirmary in rural, southern Alabama.

Low patient admissions and high costs mean the hospital does not have doctors on site around-the-clock to administer anesthesia in the case of an unexpected emergency Cesarean.

As a result, Dr. Arthur performs the surgery if there are any signs of complication, rather than waiting and running the risk that comes with the 20 to 30 minutes it takes for an anesthesiologist to arrive in the middle of the night.

"It's better for me to do a C-section when I suspect that something may happen," she said of her new strategy. “Getting the baby out healthy and happy outweighs some of the risk.”

Physicians in rural communities across America are facing the same tough choices as Dr. Arthur. Hospitals are scaling back services, shutting their maternity wards or closing altogether, according to data from hospitals, state health departments, the federal government and rural health organizations.

Nationally, 119 rural hospitals that have shut since 2005, with 80 of those closures having occurred since 2010, according to the most recent data from the North Carolina Rural Health Research Program.

To save on insurance and staffing costs, maternity departments are often among the first to get shuttered inside financially stressed rural hospitals, according medical professionals and healthcare experts.

More than 200 maternity wards closed between 2004 and 2014 because of higher costs, fewer births and staffing shortages, leaving 54 percent of rural counties across the United States without hospital-based obstetrics, data from the University of Minnesota’s Rural Health Research Center show.

The trend has escalated recently even though the national healthcare law, known as Obamacare, was designed in part to help rural hospitals thrive. But unpaid patient debt has risen among rural hospitals by 50 percent since the Affordable Care Act was passed, according to the National Rural Health Association, especially in states that decided not to expand Medicaid – the state and federal insurance program for the poor.

The outlook for these hospitals was not poised to improve had Congress approved legislation to replace Obamacare. Senate Republicans’ proposed cuts to Medicaid would have pushed about 150 more rural hospitals into the red, according to the Chartis Center for Rural Health, mainly in states that voted Republican in the last election.

But late on Monday, Senate Majority Leader Mitch McConnell said the Republican effort to repeal and immediately replace Obamacare will not be successful, after two of McConnell's Senate conservatives announced that they would not support the bill.

PAIN FELT BEYOND THE BELTWAY

The consequences go beyond politics.

When local doctors and midwives leave town, rural women lose access to essential services. Many skip or delay prenatal care that could prevent complications, premature birth or even death. The U.S. infant mortality rate is among the highest in developing countries at 5.8 deaths per 1,000 births.

Pregnant woman in rural areas are more likely to have their deliveries induced or by Cesarean section that, while potentially life-saving, are more expensive and risky than a normal vaginal birth, according to patients, medical professionals and researchers.

Almost a year after her second son’s birth, Courtney Cross is still repaying money she borrowed because of the smaller paychecks and larger gas bills she had from driving 60 minutes each way to a specialist in Mobile, Alabama.

“There were some days I had to reschedule because of the money factor,” said Cross, a medical technician and mother of two, who some months made the trip multiple times. “I had to make money.”

Cross is not alone. The most common reasons for the hospital closures are people and money. More and more people are moving to urban areas in pursuit of work and a better paycheck. And in most states, lower revenue from insurance and U.S. government payments are pushing these hospitals into financial stress, particularly in states that did not build out their Medicaid programs as Obamacare allowed.

“The majority of births in rural America are paid for by Medicaid, and Medicaid is not the most generous payer,” said Diane Calmus, government affairs and policy manager for the National Rural Health Association. “For most hospitals it is a money losing proposition.”

This is the main reason why Connie Trujillo shuttered her midwife practice this spring in Las Vegas, New Mexico. The local hospital had closed its maternity ward, and the closest hospital to deliver babies was at least 60 miles away. She sees more elective inductions because the patients live far away and can't afford to go back and forth.

“Some of them just don’t have the resources,” she said. A year after shuttering, the hospital is trying to hire additional staff to reopen the ward.

The number of induced U.S. deliveries nationally has doubled since 1990 to about 23.3 percent, but rates are significantly higher in rural areas, where it is routinely offered to women traveling long distances, especially if the weather is bad.

Induced labor and surgery come at a high cost. Commercial insurance and Medicaid paid about 50 percent more for Cesarean than vaginal births, according to a 2013 Truven Health Analytics report. The report said Medicaid payments for maternal and newborn care for a vaginal birth was $9,131 versus $13,590 for a C-section.

In largely rural West Virginia - where the Summersville Regional Medical Center became the latest hospital to stop delivering newborns earlier this year - elected inductions for first time mothers rose to 28.7 percent in 2015 from 24.1 percent in 2011, according to data provided to Reuters by the West Virginia Perinatal Partnership, a statewide effort to improve care.

"Inductions allow the physicians to manage their case loads and timing of deliveries,” said Amy Tolliver, director of the Perinatal Partnership. “We know that inductions are happening in small hospitals that have difficulty with staffing."

To address staffing issues at Dr Arthur’s hospital in Alabama, the facility paid temporary doctors for a year to keep the department open when one of its two maternity doctors stopped doing deliveries.

“It’s important to have access (to obstetrics),” said hospital president Benjamin Hansert, who also organized a group of doctors from Mobile about 40 minutes away to cover some of the shifts so that staff doctors would not always be on call. “Where the mother goes for care, the rest of the family will follow.”

For the full graphic on hospital closures, click http://tmsnrt.rs/2us7qDM