‘Morning Joe’ Scarborough writes GOP obituary: Conservatism has been reduced to nothing but ‘talk radio resentment’ 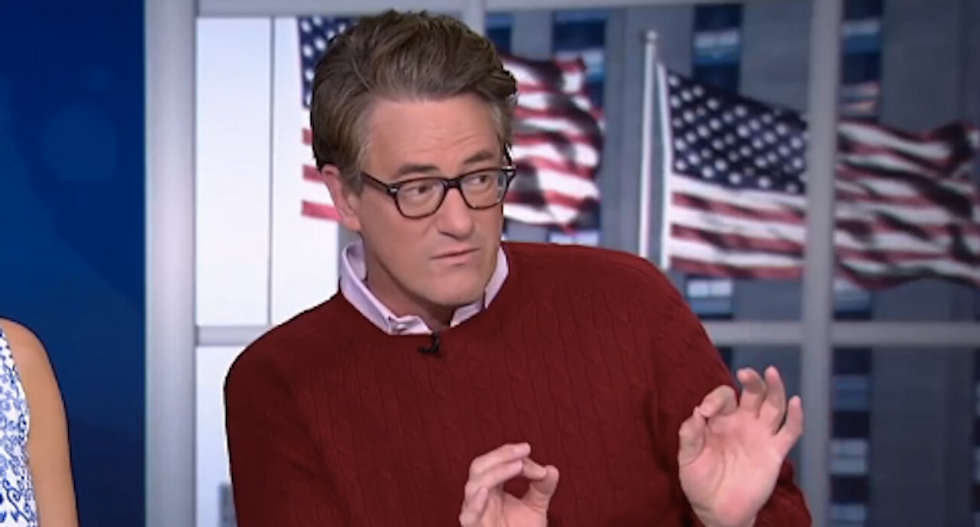 After six months in the White House, Republican President Donald Trump has caused more problems for his party than he has fixed. The political disaster prompted "Morning Joe" host Joe Scarborough to not only leave the Republican Party but to urge the GOP to think about leaving itself too.

"The Republican Party lost its senses," Scarborough wrote in a Washington Post op-ed Monday. "The political movement that once stood athwart history resisting bloated government and military adventurism has been reduced to an amalgam of talk-radio resentments."

He continued, saying that Trump has essentially taken his once "grand old party" and helped it devolve into one that wanders aimlessly searching for a cause and led by a president, who is "hopelessly ill-informed" about conservatism as well as the Constitution and American history.

“Nearly all men can stand adversity. But if you want to test a man’s character, give him power," Lincoln said. Scarborough wrote that both Trump and the GOP have failed that test.

Trump's failures are stacking up but it's GOP leaders Scarborough said are the more corrupting influences defying Lincoln's message and legacy. The problem didn't begin with the party embracing "their favorite reality-TV star [as he] brought his gaudy circus act to Washington." The problem began long before.

Scarborough bragged that his party led to a balanced budget in 2001 as he was stepping out of his Congressional seat. He made a final speech on the House floor "foolishly predicting" the GOP would be the champions of future balanced budgets and "restrained foreign policy." He was obviously wrong.

Instead, the GOP embraced absurd and costly wars while giving massive tax cuts to the wealthy. The result was "turning a $155 billion surplus into a $1 trillion deficit and doubling the national debt" in just six years. Republicans swore they'd do better when they got power next, but when given the opportunity, they failed spectacularly.

"The GOP president questioned America’s constitutional system of checks and balances," Scarborough began his list. "Republican leaders said nothing. He echoed Stalin and Mao by calling the free press 'the enemy of the people.' Republican leaders were silent. And as the commander in chief insulted allies while embracing autocratic thugs, Republicans who spent a decade supporting wars of choice remained quiet. Meanwhile, their budget-busting proposals demonstrate a fiscal recklessness very much in line with the Bush years."

All while their party's leader is being crushed under the weight of Russia-related scandals. At the same time, "Republican lawmakers will stand by a longtime Democrat who switched parties after the promotion of a racist theory about [former President] Barack Obama gave him standing in Lincoln’s once-proud party," Scarborough wrote. He argued that no Republican president in history would even be able to recognize their party.

"It is a dying party that I can no longer defend," he wrote.

He went on to echo historian Jon Meacham's prediction that the GOP vs. Democrat war would end the political duopoly. But it wasn't until the GOP took control of Congress in 1994 that Scarborough said the two-party turmoil began.

He cited Republican strategist Karl Rove, who bemoaned in 2004 that the majority of his party would likely be the final one for a generation. In just two years, their majority fell and Obama took the White House. While the tea party was able to make a splash in 2010, they along with Trump have "demolished both the Republican and Democratic establishments."

"Political historians will one day view Donald Trump as a historical anomaly," Scarborough predicted. "But the wreckage visited of this man will break the Republican Party into pieces — and lead to the election of independent thinkers no longer tethered to the tired dogmas of the polarized past. When that day mercifully arrives, the two-party duopoly that has strangled American politics for almost two centuries will finally come to an end. And Washington just may begin to work again."