New Chief of Staff Kelly was furious when Trump fired Comey and wanted to resign in solidarity: report 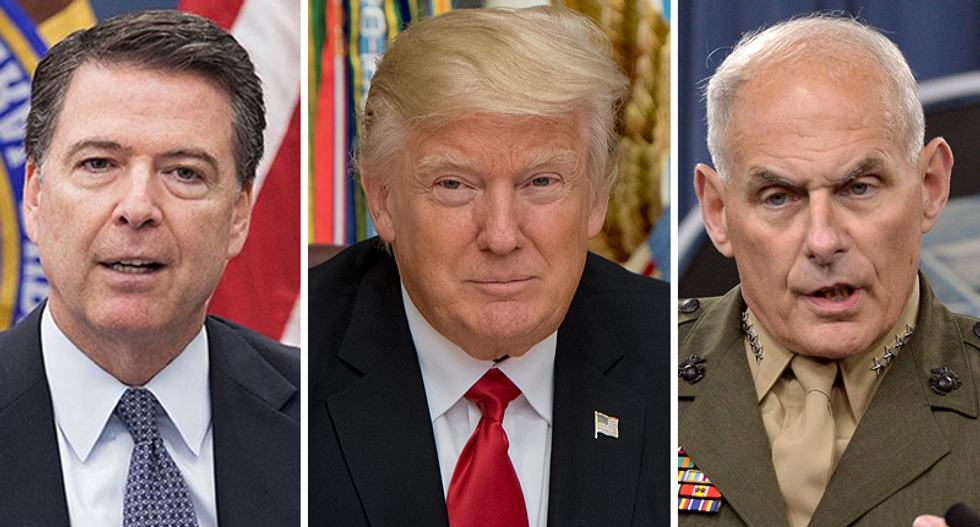 When Donald Trump abruptly fired James Comey on May 9, Gen. John Kelly—then head of the Department of Homeland Security—called the ousted FBI Director and expressed a desire to resign in solidarity, CNN reports.

According to CNN, Kelly took particular issue with the way Comey learned of his firing. As the New York Times reported in May, the former FBI director was made aware of his termination as he addressed a group of FBI intelligence employees, through televisions screens that were tuned to cable news. Meanwhile, Trump’s bodyguard and longtime aide Keith Schiller dropped off a manilla envelope containing Comey’s dismissal letter to the FBI headquarters in Washington, DC.

"John was angry and hurt by what he saw and the way [Comey] was treated,” a source told CNN. He also considered resigning in solidarity after learning of the circumstances surrounding Comey’s ouster.

Per CNN, Comey spoke with Kelly while traveling back to Washington from Los Angeles, and urged the DHS head not to resign. Though the pair are not described as close friends, they reportedly “had a professional relationship and a deep mutual respect for each other.”

On Friday, Trump announced—via tweet—that Kelly would be replacing Reince Priebus as chief of staff. The president sent word of Priebus’ dismissal while his former chief of staff accompanied him home from a speech on Long Island. According to a pool report, top Trump aides Steven Miller and Dan Scavino were in the same car as Priebus before abruptly exiting and loading into a separate vehicle, leaving Priebus alone in the car.

“Looked like Priebus departed for home while the rest of us head to the White House,” Politico’s Josh Gerstein wrote on Twitter. “Seems there's a good chance the firing went down as AF1 circled near Andrews. Flight was longer than typical short hop from NY.”

Kelly was sworn in as chief of staff Monday.