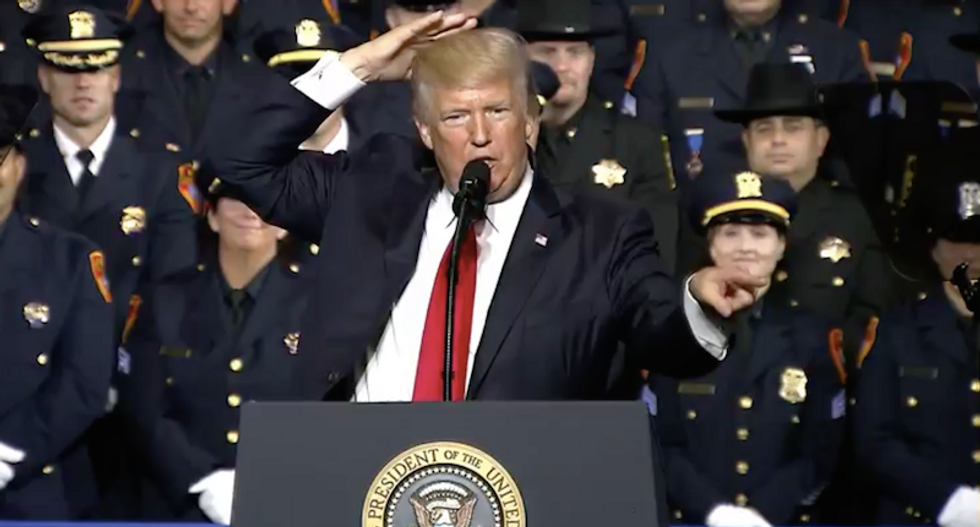 President Donald Trump is facing backlash from police departments after he delivered a speech Friday in Long Island to law enforcement officials.

During the speech at Suffolk County Community College, Trump encouraged officers to be more violent with criminal suspects.

But several police departments are pushing back on the president's comments.

The Suffolk County Police Department was one of the first to criticize.

“The SCPD has strict rules & procedures relating to the handling of prisoners,” the department wrote. “Violations of those rules are treated extremely seriously. As a department, we do not and will not tolerate roughing up of prisoners.”

On Saturday, New York police commissioner James P. O’Neill said the department's policies about the use of force “only allow for measures that are reasonable and necessary under any circumstances, including the arrest and transportation of prisoners,” according to the New York Times.

"To suggest that police officers apply any standard in the use of force other than what is reasonable and necessary is irresponsible, unprofessional and sends to wrong message to law enforcement as well as the public," he added.

Ben Tobias, a spokesman for the police department in Gainesville, Florida, also criticized the president's remarks. "Those that applauded and cheered should be ashamed," he wrote on Twitter.

"What the president recommended would be out of policy in the Los Angeles Police Department,” said LAPD commissioner. "It’s not what policing is about today."

“The Boston Police Department’s priority has been and continues to be building relationships and trust with the community we serve. As a police department we are committed to helping people, not harming them,” Evans said.