President 'applauds' Trump Jr for releasing emails: 'My son is a high-quality person' 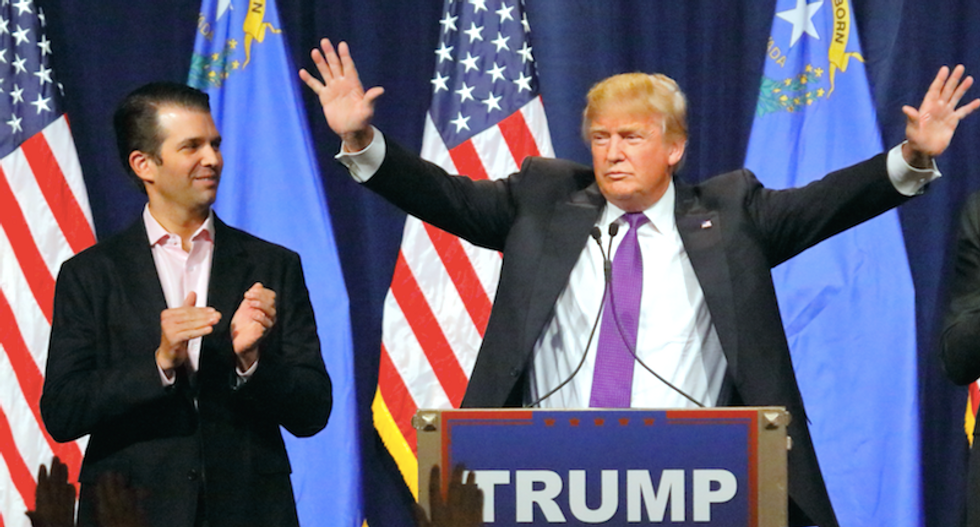 President Donald Trump on Tuesday defended his eldest son and said he was proud of him for releasing emails that showed he knew the Russian government was trying to feed him damaging information about Hillary Clinton.

"My son is a high-quality person, and I applaud his transparency," Trump said, in a statement read aloud by White House Deputy Press Secretary Sarah Huckabee Sanders.

Trump Jr. on Tuesday morning released email correspondence that he had with music publicist Rob Goldstone, who offered to set up a meeting between the eldest Trump son and Russian attorney Natalia Veselnitskaya to discuss potentially damaging information about Democratic presidential nominee Hillary Clinton.

The emails, which Trump Jr. apparently released because they were about to be published by the New York Times, reveal that he knew that Veselnitskaya was being sent to talk with him in Trump Tower in New York as part of a broader effort by the Russian government to help his father's presidential campaign.

“The Crown prosecutor of Russia… offered to provide the Trump campaign with some official documents and information that would incriminate Hillary and her dealings with Russia and would be very useful to your father,” Goldstone wrote to Trump Jr. “This is obviously very high level and sensitive information but is part of Russia and its government’s support for Mr. Trump.”

Trump Jr. did not question the appropriateness of getting information about Clinton from the Russian government, and replied, “Thanks Rob, I appreciate it.” He then offered to “do a call first thing next week” when he got back to New York after being on the campaign trail.