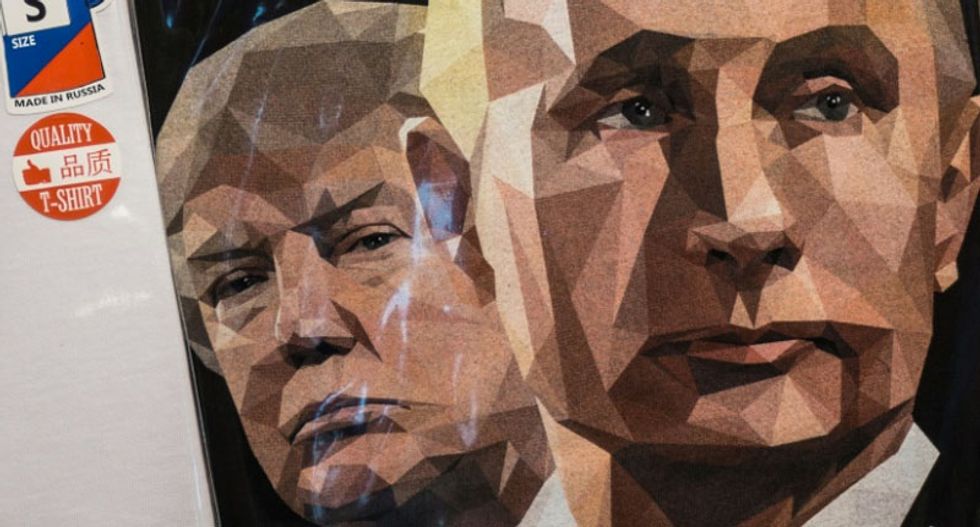 US First Lady Melania Trump was blocked at her residence as demonstrators torched cars, smashed shop windows, fired flares at police helicopters and even slashed tyres on vehicles belonging to the Canadian delegation.

The violence forced Hamburg police to call in reinforcements from other German states, and G20 organisers to drastically curtail an official programme for spouses of visiting dignitaries.

"The Hamburg police could not give us clearance to leave," said the first lady's spokeswoman, Stephanie Grisham, explaining why she had been forced to miss a cruise tour.

Tension and uncertainties were also running high within the heavily-guarded conference hall, where the leaders of the world's biggest economies struggled with a rift between Trump's US and its European allies over climate change and trade.

Trump and Putin, meeting for the first time, shook hands on arrival a couple of hours ahead of keenly-awaited bilateral talks freighted with planetary consequences.

"I look forward to all meetings today with world leaders, including my meeting with Vladimir Putin. Much to discuss," Trump wrote on Twitter.

Their meeting, say analysts, could sway issues ranging from the North Korean crisis and conflicts in Syria and Ukraine to US-Russian disarmament treaties, world trade and global warming.

Public images of the interaction between the brash property tycoon and ice-cool ex-KGB agent are likely to be dissected frame by frame for any sign of rapprochement or estrangement.

How the "contrasting styles of machismo interact... will likely be the defining feature of their relationship," noted Derek Chollet from think-tank German Marshall Fund.

Normally a ripple-free event in the diplomatic calendar, this year's G20 summit promises to be one of the stormiest in the forum's history.

Trump's "America First" approach on trade and his climate-sceptic stance are straining relations with longstanding allies, especially in Europe.

And his tough response to North Korea's missile programme -- an issue where Russia and China are urging calm -- throws a further volatile ingredient into the mix.

On the presidential election campaign trail last year, Trump said he hoped relations with Putin could be rebuilt after Russia's acrimonious ties with his predecessor Barack Obama.

But Moscow faces mounting accusations that it interfered in the election to help propel Trump into the White House. As a result, Trump faces pressure at home and from US allies to take a combative tone.

In a key speech in Warsaw on Thursday, Trump fired a rare salvo of criticism at Russia, but did not name Putin specifically.

"We urge Russia to cease its destabilising activities in Ukraine and elsewhere, and its support for hostile regimes -- including Syria and Iran -- and to instead join the community of responsible nations in our fight against common enemies and in defence of civilisation itself," he told a cheering crowd of about 10,000 people.

A White House source confirmed to AFP that Trump would be joined at the Putin meeting only by Secretary of State Rex Tillerson and a translator, an extraordinarily small cast list that raised concerns among experts.

"Neither Tillerson or Trump have any experience of foreign policy. That is one reason why they need pros in the room when meeting Putin," said Thomas Wright of the Brookings Institution.

North Korea's successful test of an intercontinental ballistic missile this week also casts a dark shadow over the US leader's first G20 summit.

Trump had warned Thursday that Pyongyang's military sabre-rattling would bear "consequences", saying he was considering a "severe" response to its "very, very bad behaviour".

After repeatedly urging Beijing to ratchet up the economic pressure on North Korea, Trump will hold what promises to be a testy meeting with Chinese President Xi Jinping on the G20's sidelines.

Beyond the complex diplomatic waltz, the US leader also faces tough talks in the main G20 conference room, where a united front is forming against his dismissive attitude to global warming.

Trump may have vowed to pull the US out of the 2015 Paris climate protection accord, but G20 host German Chancellor Angela Merkel stressed that "many many other countries want to go on implementing" it.

"We are not going to paper over the differences but rather, we will call discord discord," said Merkel.

"I believe the collective message that will be given to President Trump around this table will be the importance of America coming back into that agreement, and I hope we will be able to work to ensure that can happen," she told the BBC.