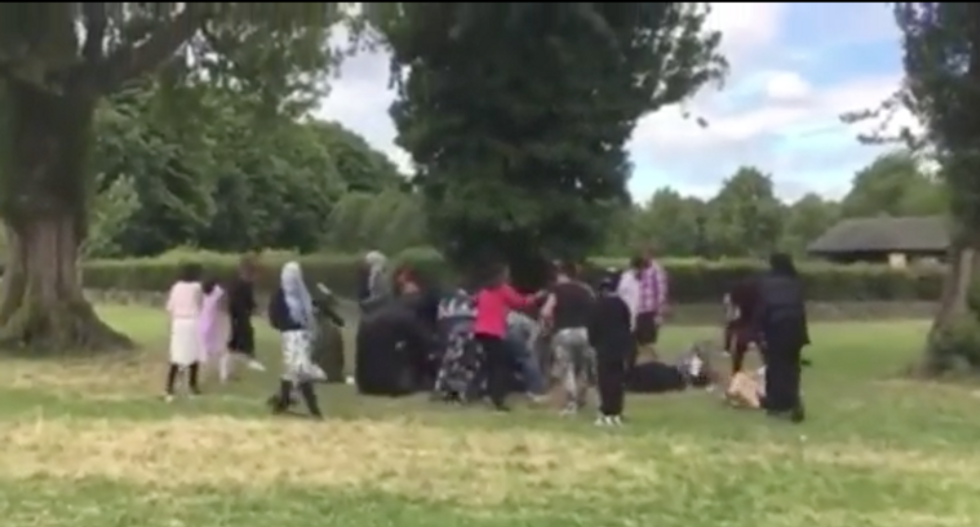 Disturbing scene of an altercation involving a racist mob at a park.

Muslim women and children fell victim to a "racist mob" while picnicking at a municipal park.

One woman was knocked unconscious during the attack, according to the BBC. Police and paramedics responded to the fracas at Florence Park in Oxford, England.

The victims where celebrating Eid al-Fitr, the "feast of breaking the fast" that marks the end of the holy month of Ramadan, when adult Muslims fast from dawn to dusk as one of the Five Pillars of Islam.

"A witness, who did not wish to be named, told BBC News that a woman had been punched and kicked after being hit by a ball from someone in another group," BBC reported. "A member of the group accused of the attack, who asked not to be named, said the football hit the woman accidentally and at no time did they use or hear any racist language."

There are conflicting reports as to whether the victims were of Sudanese or Somali origin.

Human rights activists are organizing a "reclaim the park" event in response.

"It is extremely upsetting to hear about this attack on innocent women and children going about their normal business," Oxford Stand Up To Racism co-chair Mariam Ahmed told the BCC. "Our thoughts are with the victim and family and hope they can recover from this emotionally and continue with their Eid celebrations."

Watch video of the altercation via the Daily Mail: