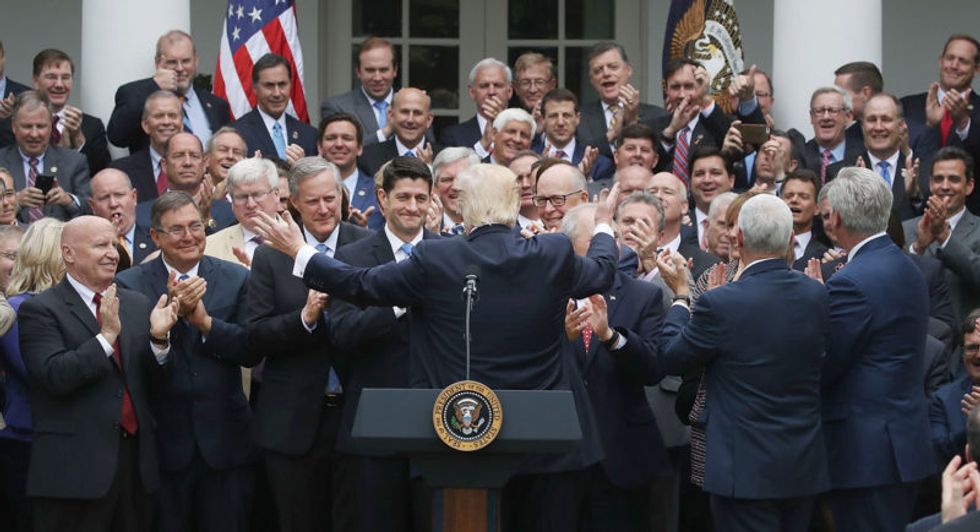 Republicans in Congress and the broader Grand Old Party (GOP) are worried that now that President Donald Trump has cut loose former Republican National Committee (RNC) honchos Reince Priebus and Sean Spicer, he could turn his followers against the party itself.

In a Politico essay published Sunday, reporter Tim Alberta said that members of the Republican Party are fretting that Trump will go rogue and use his followers' fanatical devotion to undermine other figures in the GOP should they disappoint him.

Reince Priebus was a well-connected Wisconsin Republican with long-standing relationships with Gov. Scott Walker (R-WI) and Speaker of the House Rep. Paul Ryan (R-WI). Spicer, too, has spent years working with various factions within the GOP and uniting fractious coalitions.

However, Spicer and Priebus both ran afoul of their new boss early on.

"Trump trampled Priebus from Day One," wrote Alberta, "sending out press secretary Sean Spicer, a longtime Preibus ally, to deliver a demonstrably false rant about the inaugural crowd size. Trump resented the idea that his chief of staff was there to tame him, and resented even more the notion that Priebus was the conduit to a Republican Party he had conquered."

Trump has ridiculed the soft-spoken, laid back Priebus as "weak" and called him bad at his job for months, but in firing him, the president has effectively severed a connection to the Republican Party's vast network of wealthy donors and left Vice President Mike Pence as the last fully fledged Republican official in the administration.

Now, Republicans are worried that Trump -- faced with a failed attempt to repeal Obamacare, a party in disarray, an Attorney General who won't protect him from the Russia investigation -- will declare war on the GOP and turn the 35 percent of the country that supports him against the Republican Party.

"It would represent a new, harsher type of triangulation, turning his base against the politicians of his own party that they elected," Alberta said.

In recent days, Trump has lashed out at Senate Majority Leader Mitch McConnell and saying the GOP "look like fools" for not changing the filibuster rule in the Senate. Democrats, he said, are "laughing at" Republicans, a situation that the thin-skinned first executive finds intolerable.