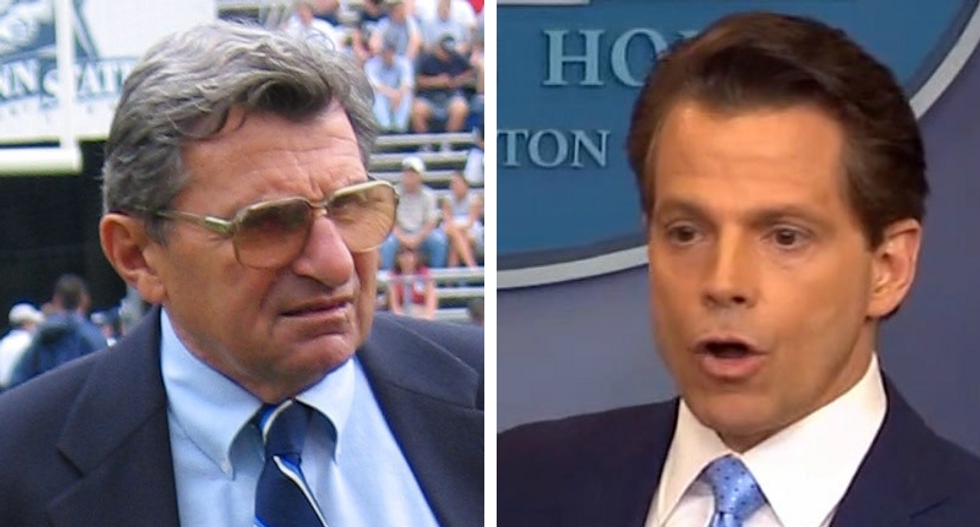 Embattled White House communications director Anthony Scaramucci has found himself in yet another scandal as a capstone of his tumultuous first week in government.

"In Scaramucci's recently disclosed financial reports, he lists as one of his many sources of income the Edward R. Presman Film Corp., which is a production company making the Paterno HBO movie," The Hollywood Reporter explained. "HBO won't say what role Scaramucci has now in the film — probably not much, though — only that he will receive credit as an executive producer because he brought in financing for the project."

Coach Paterno, or JoePa as he was called, was fired for his role in covering up child sexual abuse by Assistant Coach Jerry Sandusky, who was subsequently convicted of 45 counts of sexual assault against 10 boys. All of the victims came from disadvantaged homes.

When former FBI Director Louis Freeh conducted an exhaustive investigation of the scandal, he concluded, “The most powerful men at Penn State failed to take any steps for 14 years to protect the children Sandusky victimized.”

Scaramucci was hyping the film as recently as June 5:

And in his first week on the job, Scaramucci also positively quoted Paterno:

Anthony @Scaramucci says the White House staff should have the honor of Joe Paterno. Frankly I think they already do.
— UndeadPaterno (@UndeadPaterno)1501155896.0