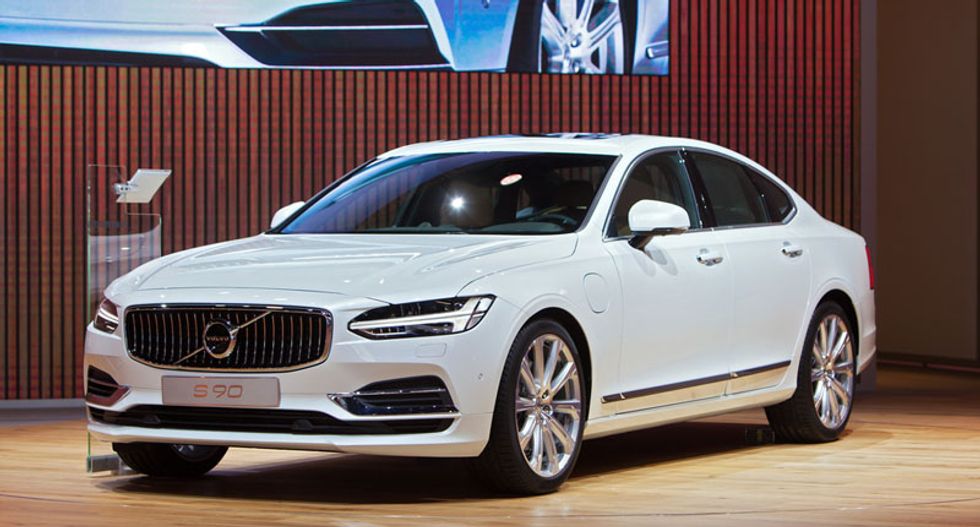 Swedish carmaker Volvo Cars said Wednesday it plans to phase out production of conventional petrol-only cars starting from 2019, with all new models to be either electric or hybrid.

The Gothenburg-based group is the first major manufacturer to electrify all of its models and to set out a roadmap for the gradual end to the internal combustion engine, a century and a half after it was invented.

Volvo, owned by China's Geely, said it plans to launch five fully electric models between 2019 and 2021, three under its own brand and two under the Polestar brand, as well as a range of hybrid models.

Polestar is a subsidiary specialising in high-performance electric vehicles and is a rival to California-based Tesla, which is to launch the production of its first lower-priced "Model 3".

"This announcement marks the end of the solely combustion engine-powered car," Volvo Cars president and chief executive Hakan Samuelsson said in a statement.

A Volvo Cars spokesman said the first fully electric car would be manufactured in China, and that the production location of the other four was yet to be determined.

The car maker, which posted record sales in 2016, noted that "consumers are increasingly pleased with electrified cars" and that it intends to respond to the growing demand for cleaner and less polluting vehicles.

A Volvo Cars spokesman said the company would continue to manufacture existing petrol or diesel-only models launched before 2019, but they will gradually be replaced by hybrid and fully electric cars.

The announcement comes a week after Geely unveiled a research and innovation centre in Gothenburg, focusing on the development of electric vehicles.

"When we said it, we meant it. This is how we are going to do it," Samuelsson said in the statement.

In an interview with the German daily Frankfurter Allgemeine Zeitung (FAZ) in May, Samuelsson had said he did not want to develop a new generation of diesel engines because of the high costs of stricter regulations.

EU legislation, which sets mandatory emission targets for cars, stipulates that, by 2021, the emissions of all new models and cars must not exceed 95 grammes of CO2 emissions per kilometre on average. Failure to comply would result in a fine.

In Sweden, the government plans to raise the tax rate on CO2 emissions in 2018, which would lead to a fivefold increase in the rate for some cars.

In concrete terms, that would translate into an increase in taxes of 630 euros ($713) per year for an owner of a Volvo V90 T5 4WD and an increase of more than 1,500 euros for an owner of an SUV BMX X6 M, according to calculations by specialist magazine, TeknikensVarld.

Proponents of the eco tax argue that this is a marginal cost compared to the purchase price of these high-end models, which retail at between 60,000 and 100,000 euros.

"We have high climate targets in Sweden (and) the transport sector must change direction," Sweden's industry and innovation minister Mikael Damberg told AFP.

In 2016, new registrations of all electric and hybrid cars amounted to 433,847 across the whole of the EU, almost three percent of the total registrations.

Volvo aims to sell one million electric cars before 2025, when it wants its production operations to become "climate neutral".

Since Geely bought the brand from the American Ford in 2010, Volvo Cars has seen a dramatic turnaround. In 2016, its net profit group share almost doubled to over 600 million euros.