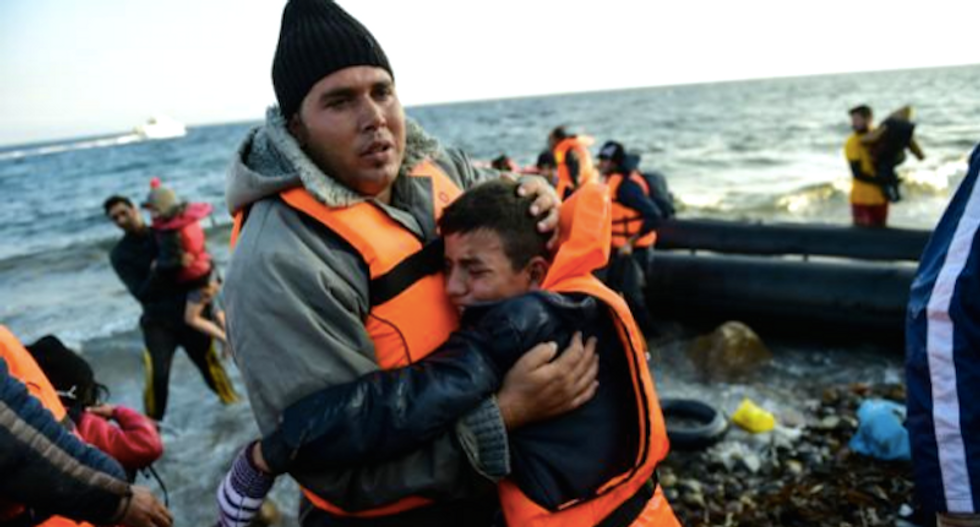 After helping a donor unload a box of pots and pans in the reception area, Mary Poole settles in behind her desk in a cramped office. “I used to make jewelry,” she laughs, referring to her life more than a year and a half ago, before she became executive director of Soft Landing in Missoula, Montana.

Today, Poole runs the small nonprofit, which helped persuade the International Rescue Committee to establish a refugee resettlement office here last year. At a time when resettlement is politically contentious, the nonprofit is providing support to refugees from across the world in a politically conservative state where only 107 refugees have been resettled since 2001, the lowest total of any state except Wyoming.

Soft Landing’s focus is as much on the Missoula community as on incoming refugees. The organization, which consists of two part-time staff members, coordinates volunteers to support incoming refugees, including families that help orient refugees to their new home and connect them to their neighbors. The organization also promotes dialogue among community members on the sometimes uncomfortable topic of resettlement. Their mission is to ensure the Missoula community is both welcoming and informed.

Before co-founding Soft Landing, Poole says, “I didn’t even know what a refugee was. I didn’t know what resettlement was—I had no context.”

Poole isn’t alone. Montana is an expansive rural state with the third lowest population density in the United States (7.1 square miles per person) and less diversity (89 percent white) than all but seven states. These factors contribute to the state’s reputation for being culturally parochial and politically conservative. Last November, 56.4 percent of residents who cast a ballot supported President Trump.

It’s also been roughly 37 years since a significant population of refugees was resettled here within a short time frame. Between 1979 and 1980, roughly 366 Hmong refugees were resettled in Missoula, a more liberal community than much of the rest of the state, after fleeing repression from communist forces in Laos.

Now, nearly 40 years later, Missoula is accepting refugees again. Since last August, 117 refugees have been resettled in Missoula from Iraq, Syria, Ethiopia, Eritrea, and the Democratic Republic of Congo—more than the total number resettled in the entire state over the past 16 years. And hundreds of local volunteers have joined Soft Landing to make them feel welcome.

When asked why she decided to lead the organization, Poole responds thoughtfully. “It came about because of the picture of a dead child,” she says. “I don’t feel like there was a choice. It was something so much deeper than a thought or a decision.”

Poole is referring to the tragic photo of a drowned Syrian refugee—Aylan Kurdi, aged 3—lying face down on a beach near Bodrum, Turkey. The boy’s family had been fleeing their war-torn home in Syria when their boat capsized in early September 2015. The photo was widely shared and helped bring the “ migrant crisis into focus,” according to one headline from the New York Times.

Poole remembers seeing the photo on Facebook while she was breastfeeding her then 9-month-old son. She was grief-stricken. Before that, Poole says, she would have struggled to locate Syria on a map and would never have identified herself as an activist.

After seeing the photo, Poole reached out to women in her book club to process the crisis in Syria. Everyone had seen it, she recalls. “As mothers, we couldn’t stop thinking about it.”

The dialogue sparked a group exchange over email, and eventually someone asked, “what can we do about this?”

Together, the women had the idea to bring refugees across the world to Missoula, but they had no idea where to begin. So they began talking to their neighbors. “The idea passed around to a couple friends and then a couple more. Pretty soon we had a strong group of [interested] people,” Poole says.

The connection was both timely and fortuitous. The IRC was already considering locations for new offices to accommodate an increase in the refugees allowed into the United States, from 70,000 in Fiscal Year 2015to 85,000 in FY 2016. Johnson also knew the Missoula community well. He had been involved with the IRC’s work in Missoula with Hmong refugees at the beginning of his career and had visited Montana several times on fly-fishing trips.

“We knew from experience that Missoula was a good town with a lot of international awareness,” Johnson says. “It’s a favorable political environment that’s unique in Montana.”

The existence of Soft Landing made his decision even easier. “The big bonus was there was a local group that was willing to provide support,” Johnson says. “That’s a unique and attractive quality.”

He made a trip in November 2015 and wrote a proposal for review by the U.S. State Department, which approved a new IRC office in March 2016.

“The first family arrived in late August,” Poole explains, “one week shy of a year since those photos of Aylan Kurdi came out.”

Today, when refugee families arrive in Missoula, volunteer mentors meet them at the airport and stay in close contact with them from day one. Soft Landing’s services are client-driven from that point forward.

“It’s a huge choose-your-own-adventure,” says Poole, who recruits volunteers to do everything from teaching driver’s education and English courses to providing childcare and financial counseling. After a recent CrowdRise campaign netted $32,000, the part-time director hopes this adventure will continue for the volunteer driven organization.

“There’s just a very independent, Western spirit here that leads us to say, ‘of course we can.’”

This approach has continued to serve Soft Landing well as the organization moves forward in a political climate marked by anti-immigrant rhetoric and executive orders. In January, after President Trump issued his first travel ban blocking citizens of Iran, Iraq, Libya, Somalia, Sudan, Syria, and Yemen from entry into the country for 90 days, hundreds of Missoulians gathered in the city center to protest the order, including Poole.

But Poole’s careful to point out that protesting policies is different from protesting people with different perspectives. In fact, cultivating understanding between those who wish to welcome refugees and those who oppose their resettlement has become an important goal for Soft Landing, especially since the arrival of refugees in Missoula has been a source of contention in surrounding towns and rural areas.

“Doing something as large and life-changing as bringing refugees to a community that hasn’t done that in a long time requires more than just supporters to be engaged and interested,” she says. To this end, Poole recently participated in a public information meeting in Hamilton, Montana, a place where local county government sent a letter to the U.S. State Department opposing refugee resettlement in Missoula. The purpose of the meeting was to share information about refugee resettlement and listen to concerns, according to Poole, not to settle an argument.

This is a tactful approach in Montana, a rural state that recently elected a vocal supporter of the travel ban, Greg Gianforte, to Congress following a contentious special election. The approach, though, comes naturally to Poole and her colleagues.

“Our goal is not to convince people what we’re doing is right and what they’re doing is wrong,” she says. “Our goal is just to create a more welcoming environment for refugees to call home.”

In fact, she says, “We have another family arriving tonight.”

Gabriel Furshong wrote this article for YES! Magazine. Gabriel writes from Helena, Montana. His writing has appeared in High Country News, In These Times, the Cossack Review, and elsewhere.
Report typos and corrections to: corrections@rawstory.com.

Milwaukee Crime Stoppers is offering a $28,000 reward for information leading to an arrest in the killing of Brazil Johnson. The 28-year-old transgender Black woman was shot in Milwaukee near Teutonia and Garfield Avenues. No arrests have been made thus far, and the Milwaukee Police Department (MPD) continues to search for suspects.