‘They had no qualms violating my rights’: Ohio mom says gun militia demanded $10 to walk through mall 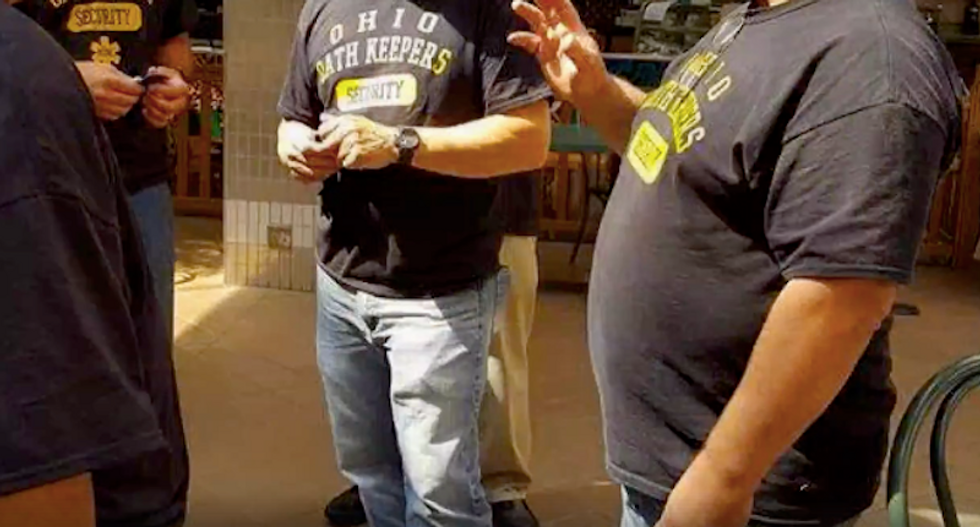 An Ohio family says they were harassed and ordered to pay $10 to walk through a mall near their home, while a right-wing group group hosted a "prepper" show there.

In a letter to the editor of the Sentinel-Tribune, Amanda Sharp said she was visiting Woodland Mall on Sunday with her 4-year-old son and his father when men identifying themselves as Oath Keepers security guards stopped them.

The security guards said they had to radio ahead for approval for the family to walk from the movie theater to the main entrance and stalked them when they objected to paying admission to a survivalist event.

"When my child's father stated that we were leaving and did not require anyone's permission to do so, we were followed across the food court by 'security' the entire time, and he was giving our descriptions over his radio," Sharp told the newspaper.

The group, which opened a storefront at the Bowling Green mall in April, was hosting a show over the weekend showcasing survivalist preparations.

"This was insulting, unnecessary, and was absolutely harassment," Sharp said. "Not only were these so-called Oath Keepers harassing us, they frightened my special needs son. This is completely unacceptable. For an organized group of people who claim to want to defend against infringement of their rights, they certainly had no qualms violating mine."

The Oath Keepers are a gun-rights group primarily made up of current and former law enforcement and military personnel who have vowed to disobey laws they believe are unconstitutional.

The storefront, which is operated by the wife of the state Oath Keepers' executive director, is not owned by the nonprofit organization and does not sell guns because another store already does and has a noncompete agreement at the mall.

"If this organization or business wants to hold events, fine," Sharp said. "However, when doing so in an open public building, do not harass and stalk families who are there to enjoy family time."

The Oath Keepers group has gained attention in 2015, when some members patrolled Ferguson, Missouri, as protests raged over the police shooting death of Michael Brown, and some demonstrators felt targeted by the armed group.

Nick Getzinger, executive director for Ohio, told the Sentinel-Tribune his group has no connection to the national Oath Keepers group and was not a militia.

"We are not an anti-government organization, we believe in a constitutional government," Getzinger said. "We are a community response organization and we will work closely with local governments, law enforcement and others in times of crisis, whether its natural or man-made."

The group hosted an expo last month at the mall that featured Challice Finicum Finch, daughter of LaVoy Finicum, who was shot and killed by federal agents after fleeing a road block in 2016 following a standoff at the Malheur National Wildlife Reserve.

Getzinger told the Sentinel-Tribune that a similar event last year was aimed only at fellow Oath Keepers, but he said public curiosity had prompted him to increase the scale this year to promote the group and its views.

"Last year was mostly training and this year we've incorporated the general public," Getzinger said. "Given the current economic situation and the potential for economic collapse or natural disasters, we're there to help."