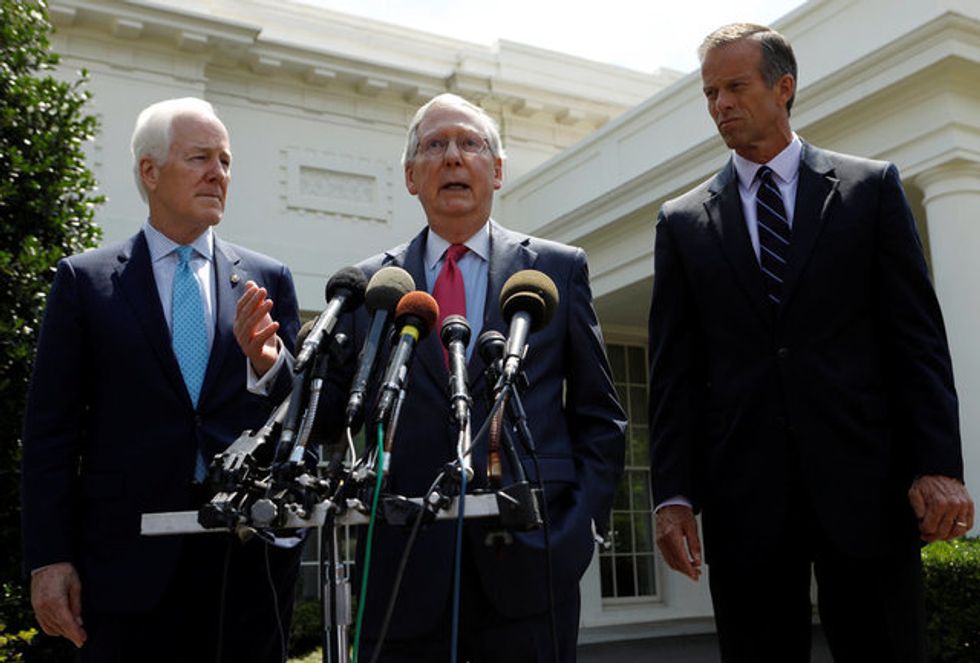 Republicans struggling to agree on healthcare legislation to overhaul Obamacare obeyed U.S. President Donald Trump's orders to try to swiftly reach a deal but were unable to resolve their differences in a long, late-night meeting.

Earlier on Wednesday, Trump took Senate Republicans to task for failing to agree on how to dismantle Obamacare, as a new report showed 32 million Americans would lose health insurance if senators opt to repeal the law without a replacement.

Trump gathered 49 Republican senators for a White House lunch after a bill to repeal and replace the 2010 Affordable Care Act collapsed on Monday amid dissent from a handful of the party's conservatives and moderates.

There was no immediate breakthrough.

"We still have some issues that divide us," said Senator Ted Cruz, a conservative who has proposed letting insurers offer cheaper bare-bones plans that do not comply with Obamacare regulations.

Republicans attending the late meeting sent their staff away in order to talk frankly and Senator John Kennedy said everyone was negotiating in good faith but he added he did not know if they would reach agreement.

Almost all the other senators rushed off after the meeting without comment.

As it was getting underway, the nearly two dozen Republican senators were shaken by news that their colleague, veteran Senator John McCain, had been diagnosed with brain cancer.

McCain's absence from the Senate makes the job of passing a healthcare bill more difficult because leaders need every Republican vote they can get.

"Obviously, I think more people are worried about his health than thinking about the math. You understand the math. Obviously it makes things difficult," Senator Bob Corker said as he left the meeting.

Trump had taken a hands-off approach to the healthcare debate last week and suggested on Tuesday that he was fine with letting Obamacare fail. Then on Wednesday he switched course and demanded senators stay in Washington through their planned August recess until they find common ground on healthcare.

"We can repeal, but we should repeal and replace, and we shouldn't leave town until this is complete," Trump said at the meeting.

Trump made the repeal and replacement of Obamacare, which he has called a "disaster," a central promise of his 2016 campaign.

Even with Trump's new push, Republican leaders in the Senate face a difficult task getting moderates and conservatives to agree on an overhaul that can pass.

Senate Majority Leader Mitch McConnell had planned to hold a straight repeal vote next week, but several Republican senators have already said they oppose that approach.

Thirty-two million Americans would lose their health insurance by 2026 if Obamacare is scrapped without an alternative in place, the nonpartisan Congressional Budget Office reported on Wednesday, while 17 million would become uninsured next year alone.

At the same time, premiums on individual insurance plans would rise 25 percent next year and double by 2026.

The CBO's estimates were unchanged from a previous report that assessed the impact of a 2015 bill to repeal Obamacare that passed the House of Representatives and Senate and was vetoed by Obama.

Democrats were swift to highlight the CBO's assessment, while Republicans remained silent.

"President Trump and Republicans have repeatedly promised to lower premiums and increase coverage, yet each proposal they offer would do the opposite," Senate Democratic leader Charles Schumer said in a statement.

Insurers and hospitals have lobbied against straight repeal, saying the limbo would increase uncertainty and their costs.

"CBO projects half the country would have no insurers in the individual market by 2020 under the new repeal bill. That's a true death spiral," tweeted Larry Levitt, vice president at the Kaiser Family Foundation, a healthcare research group.

Republicans say Obamacare is a costly intrusion into the healthcare system.

But the party is divided between moderates concerned the Senate bill would eliminate insurance for millions of low-income Americans and conservatives who want to see even deeper cuts to Obamacare, which boosted the number of Americans with health insurance by 20 million through mandates on individuals and employers, and income-based subsidies.

Moderate Republican Senators Susan Collins, Lisa Murkowski and Shelley Moore Capito said they opposed McConnell's plan for a repeal that would take effect in two years. All three attended the lunch with Trump.

With Democrats united in opposition to repeal, McConnell can only lose two votes from the Republicans' 52-48 majority in the 100-seat Senate to pass healthcare legislation.

Opponents of repeal protested throughout Senate buildings on Wednesday afternoon, leading to 155 arrests, police said. Demonstrators returned in the evening to yell as senators arrived for the meeting.

Party fractures also emerged in the House of Representatives. The chamber passed a plan to repeal and replace Obamacare in May. But on Wednesday, the House Freedom Caucus, the Republican Party's conservative wing, filed a petition to vote on a straight repeal.

House Speaker Paul Ryan's spokeswoman, AshLee Strong, said: "The House passed an Obamacare repeal-and-replace bill we are proud of and we hope the Senate will take similar action."