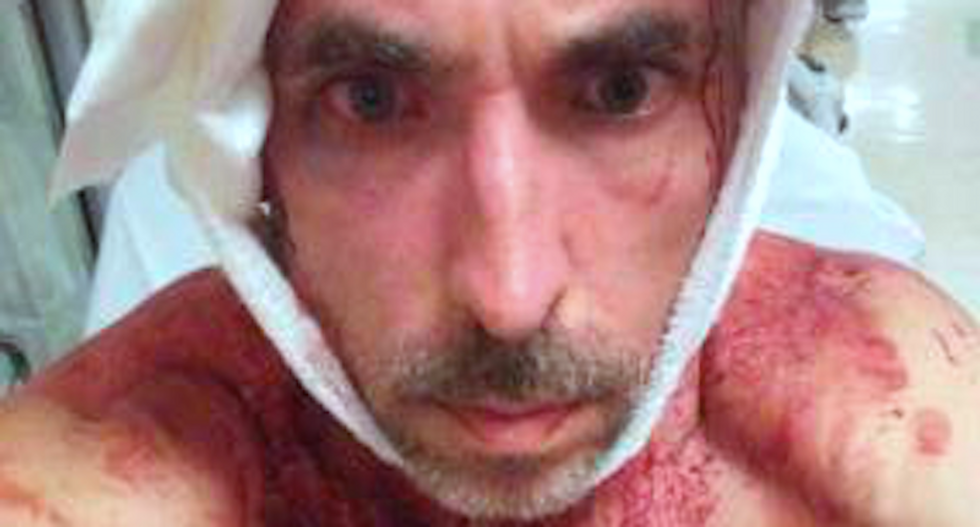 A Trump supporter who interrupted a Christmas Mass to rant about "Pizzagate" was beaten up over the weekend by anti-fascist activists during a Philadelphia political demonstration.

Howard Caplan -- a 48-year-old self-professed conspiracy theorist who gained notoriety by carrying "Hillary 4 prison" signs around the city -- went Sunday to protest a demonstration calling for the impeachment of President Donald Trump, reported the Philly Voice.

The slogan was popularized by Alex Jones' InfoWars website, and Caplan promotes "Pizzagate" and other conspiracy theories discussed by the Trump-backing broadcaster.

Caplan said he was attacked by three men he identified as members of Antifa, after they asked him "in a really nice way" about the Trump 2020 he was carrying to "troll" the protesters.

“Next thing I know, I’m on the ground," Caplan told the Voice. "Felt like they hit me in the head with a bottle. They were stomping me a bit while I was fighting them off. They scattered. I looked around, disoriented, thought they stole my backpack but they didn’t."

The assailants ran off, and Caplan said he asked bystanders to call police as he chased an attacker he described as "fat."

“There was a transit cop there, and I yelled ‘f*cking get him!’" Caplan told the newspaper. "Fat boy got caught. I recognized the other guy because of the shirt he was wearing. I noticed it earlier in the day. They both got caught and so did the third one."

Philadelphia police announced three arrests -- 32-year-old Daniel Vieira, 33-year-old Christopher Sheerin and 40-year-old Shawn Menne -- made near the area where Caplan was attacked, but he claims those weren't the same men.

Police said Vieira struck an officer from behind as Sheerin was being arrested, and they said Menne was arrested for punching a Trump supporter in the face.

Menne had two flares and a plastic bag of potassium chlorate, police said.

"The other arrests are from a different case, but I saw them catch all three that jumped me," he said. "The detectives came to see me at Hahnemann (hospital) to get details. It’s more complicated than the other case since they didn’t see the incident."

Caplan wound up with a black eye, six staples in his head and a scratched cornea from the attack.