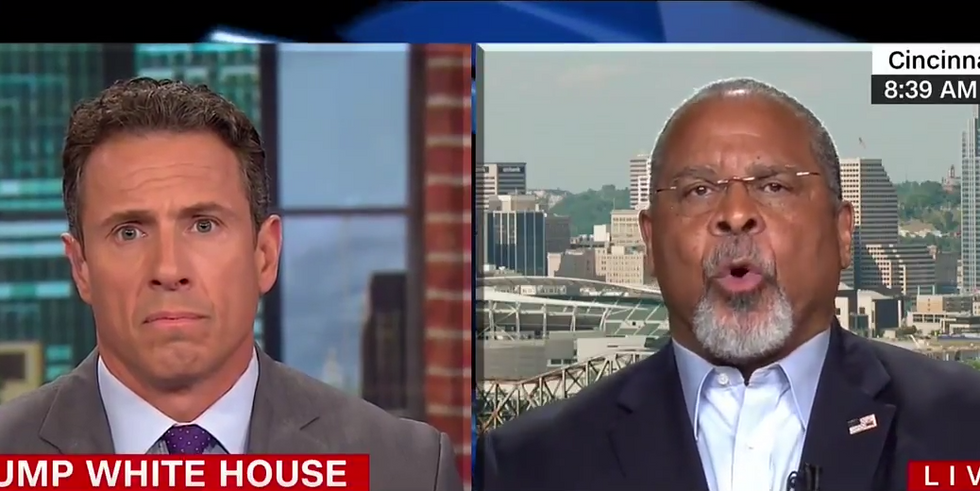 Family Research Council fellow Ken Blackwell, a former Republican politician who serves on President Donald Trump's commission investigating "voter fraud," had a contentious interview on CNN Thursday morning in which he struggled to explain what the commission was doing to stop potential Russian interference in future elections.

When Blackwell tried to talk about the importance of working to stop foreign powers from interfering in American elections, host Chris Cuomo stopped him right in his tracks and pointed out that his commission at the moment isn't formally looking into Russia's ability to hack our election systems.

"You're not doing that with this commission," Cuomo stated. "You're not looking at Russian hacking at all, you're trying to get people's personal information."

Blackwell responded by mumbling something unintelligible before simply responding, "Come on, Chris."

"That's what you're requesting!" Cuomo shot back, referring to the panel's request that states hand over key information about their registered voters that may include the last four digits of their Social Security numbers.

"There are states that will not release that, and that is understandable," he said. "The question before us is, 'How do you protect the vote?' Let me just give you an example. In 1976, Jimmy Carter won Ohio by a little under 12,000 votes... if you had just flipped 6,000 votes, Ford would have remained president, and Carter would have gone back to Georgia. That's how important one vote in one precinct is."

Cuomo pointed out that the commission isn't set up to protect voting rights, however, because it was "asking for information that, arguably, you'd never want public."

"Our voter rolls across the country are corrupt," Blackwell insisted. "And that corruption is a vulnerability and an opening to folks who might want to change the result of an election."