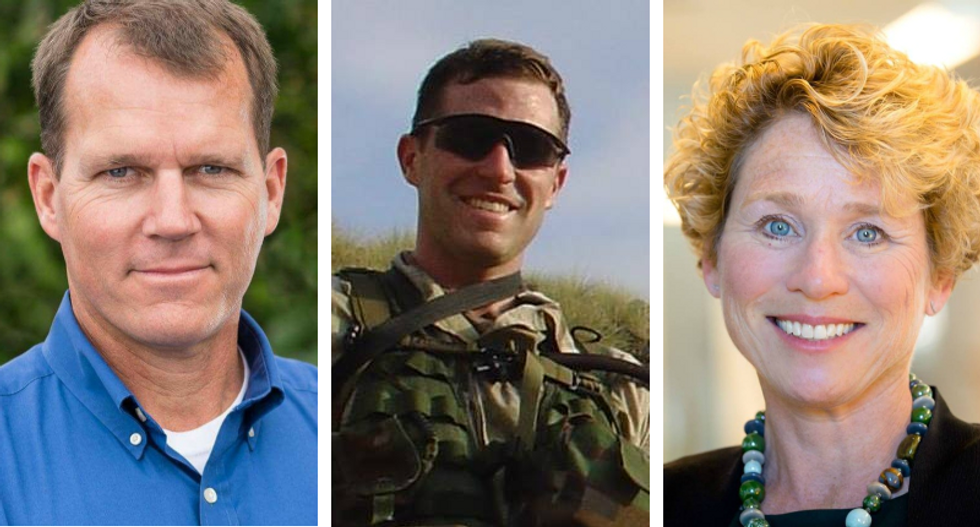 Democratic Party leaders seeking to retake the House of Representatives are aggressively recruiting war veterans to run for Congress.

"Democratic officials also see candidates with a military pedigree as an appealing contrast to entrenched, career politicians," Emmarie Huetteman reported for the New York Times. "And they believe that candidates with military service help the party counter Republican claims that Democrats are weak on national security."

Democrats need to pick up 24 seats during the 2018 midterm elections in order to congress the House of Representatives.

Many of the military veterans running for Congress as Democrats have cited Commander-in-Chief Donald Trump as a motivating reason.

I'm deeply troubled by President Trump and what he's trying to do to country and our democracy," retired Army Ranger Jason Crow, who is running for the Aurora, CO seat in Congress, told CBS News.

The combat veteran added that every military unit brings together "Republicans, Democrats, unaffiliated, every different background, every part of the country, urban rural, every rung of the economic ladder, and they have to come together very quickly ... or the mission fails."

"All the bravado and the wailing and gnashing of teeth isn't the way we conduct ourselves as professional service members," Chrissy Houlahan said of Trump's rhetoric.

In fact, Donald Trump is part of the official recruitment pitch.

"Washington seems like a dirty place. But so was Afghanistan. And so was Iraq. And we’re going to clean it up," Congressman Seth Moulton (D-MA), who retired as a Marine Captain after four tours in Iraq, tells potential recruits. "Donald Trump’s policies are terrible for our national security — what group of people better to point that out than a group of Democratic veterans?"

Democrats are already seeing success in their candidate recruitment strategy.

"In addition to the nearly 20 veterans who have announced they are running as Democrats in Republican-held House districts, about 15 more are expected to make announcements by the end of the summer, according to the Democratic Congressional Campaign Committee," the Times noted.

“If you look at the type of fear-mongering and scaremongering that Republicans do quite often when it comes to national security, quite unfairly, there is a strong patriotism that comes with being a veteran that makes those kinds of attacks fall flat and even backfire,” said John Lapp, who was the executive director of the Democratic Congressional Campaign Committee the last time Democrats' retook control of congress.