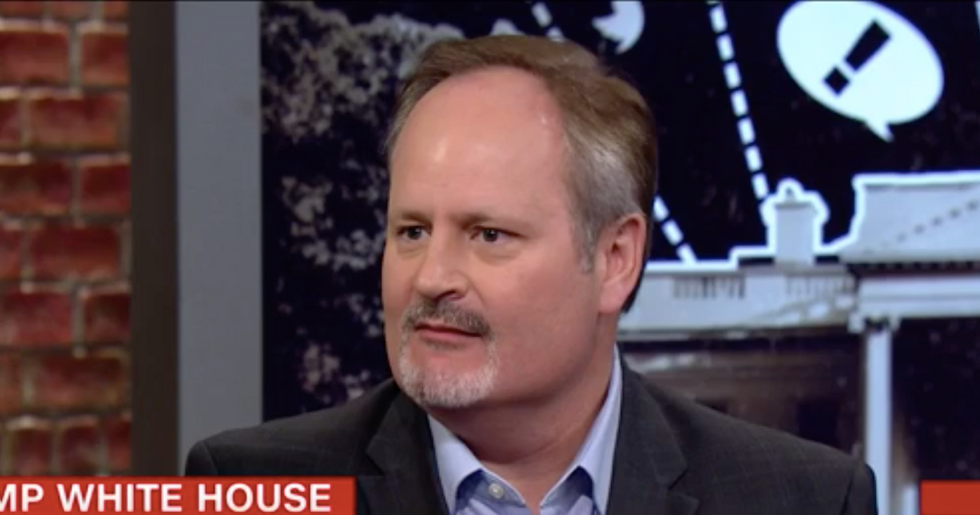 Tim O'Brien, author of TrumpNation: The Art of Being the Donald on CNN (Screen capture)

Tim O'Brien -- author of TrumpNation, the Art of Being the Donald -- told CNN's "New Day" on Monday that to credit President Donald Trump with a coherent media strategy is to overestimate him. He's really only using Twitter for "self-preservation or self-aggrandizement."

Trump roiled Sunday's media coverage by beginning the day with a tweet showing a violent attack on a figure labelled "CNN," which led many observers to the conclusion that the president is calling for violence against journalists.

On Monday morning, "New Day" said that Trump is utilizing social media as an effective distraction away from real issues like the Russia probe.

O'Brien -- who said Trump tried to intimidate him during the TrumpNation writing process by lying about recording their interviews -- told "New Day" that they're giving Trump too much credit.

"Yeah, I don't think he's a strategic thinker," O'Brien said. Trump has been doing this for decades, he said, stirring controversy when he wants to tweak media coverage in a different direction. "I don't think it's new for politicians to set up the media as a punching bag when they're concerned about broader threats to their agenda."

There are only two motivations that cause Trump to do anything, O'Brien said, "Either self-preservation or self-aggrandizement."

He also said that Trump is probably genuinely afraid of what the Russia probe will reveal about his ties to Russia's criminal underworld and the dubious provenance of his funding.

Trump biographer @TimOBrien: "I don't think [POTUS] is a strategic thinker" when it comes to media attacks https://t.co/aTqRwNqSlj