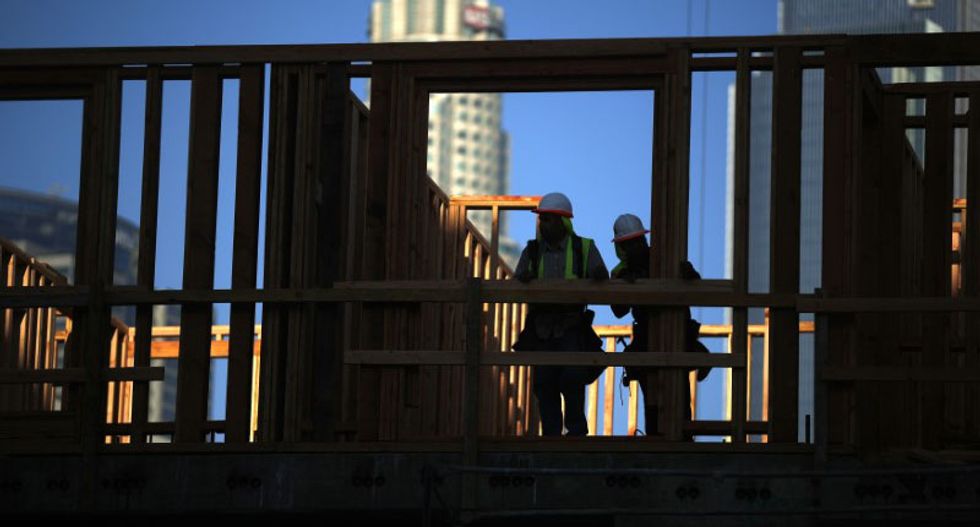 U.S. private employers hired fewer workers than expected in June and applications for unemployment benefits last week increased for a third straight week, pointing to some loss of momentum in job growth as the labor market nears full employment.

Those signs were also evident in another report on Thursday showing growth in services industry employment slowing in June even as the sector, which accounts for more than two-thirds of the U.S. economy, continued to expand at a healthy clip.

The moderation in job gains likely reflects difficulties by employers finding suitable workers amid an unemployment rate that is at a 16-year low. Even so, the labor market remains strong and tightening conditions could allow the Federal Reserve to raise interest rates again later this year.

"The slowdown in hiring, in our view, is a function of the difficulty in hiring workers," said John Ryding, chief economist at RDQ Economics in New York. "Companies remain very reluctant to lay off workers and this is a continued sign of the tightness of the labor market."

The ADP National Employment Report showed private sector payrolls increased by 158,000 jobs last month, stepping down from the 230,000 positions created in May and below economists' expectations for a gain of 185,000.

The report, jointly developed with Moody's Analytics, came ahead of the Labor Department's more comprehensive non-farm payrolls report on Friday, which includes both public and private-sector employment.

While the ADP report has a spotty record predicting non-farm payrolls, June's modest job gains together with the modest rise in first-time applications for jobless benefits and cooling services sector employment pose a downside risk to the government's June jobs report.

According to a Reuters survey of economists, non-farm payrolls likely increased by 179,000 last month after May's 138,000 gain. The unemployment rate is forecast unchanged at 4.3 percent.

The dollar fell against a basket of currencies on the data as did prices for U.S. Treasuries. Stocks on Wall Street were trading lower.

In a separate report, the Labor Department said initial claims for state unemployment benefits increased 4,000 to a seasonally adjusted 248,000 for the week ended July 1. It was the third straight weekly increase in claims.

The rise in claims last week likely reflected automakers' closing of assembly plants for the annual summer retooling. Still, it was the 122nd straight week that claims remained below 300,000, a threshold associated with a healthy labor market.

That is the longest such stretch since 1970, when the labor market was smaller. The labor market is near full employment, with the jobless rate at a 16-year low.

Unadjusted claims for Michigan, a hub for auto production, increased 1,159 last week. Automakers normally shut assembly plants for annual retooling at the start of July, which tends to push up claims.

Applications are likely to remain elevated as some companies like General Motors embark on extended summer shutdowns to deal will slower sales, which have led to an inventory bloat.

Motor vehicle manufacturers reported on Monday that auto sales fell in June for a fourth straight month. Even before the annual summer plant closures, automakers have been laying off workers in response to the softening demand.

"As the recovery has progressed and pent-up demand for autos has likely been filled, the high levels of existing inventories and softening demand are likely to lead some automakers to shut down for longer than the normal one to two weeks," said Michael Gapen, chief economist at Barclays in New York.

A third report from the Institute for Supply Management showed its non-manufacturing sector index rose half a point to a reading of 57.4 in June. A reading above 50 indicates expansion in the vast services sector. Industries reported an increase in new orders, but said employment growth had slowed.

The construction industry described the labor market as continuing to be "constrained," and said low unemployment in most regions was "making hiring difficult on all phases of the construction supply chain."

The services sector strength was also echoed by another survey on Thursday. The IHS Markit's services sector activity index rose to a reading of 54.2 last month from 53.6 in May, marking a third month of accelerated growth in activity.

A report from the Commerce Department showed the trade deficit fell 2.3 percent to $46.5 billion in May.

When adjusted for inflation, the trade deficit narrowed to $62.8 billion from $63.8 billion in April. Real goods exports surged to an all-time high in May, propelled by record high petroleum exports.

Still, the real trade deficit averaged $63.3 billion in April and May, above the first quarter's average of $62.2 billion. That suggests trade will be a drag on gross domestic product in the second quarter after contributing 0.23 percentage point to the economy's 1.4 percent annualized growth pace in the first three months of the year.

The Atlanta Federal Reserve lowered its second-quarter GDP forecast to a 2.7 percent rate from 3.0 percent earlier.