US senators demand coherent policy from Trump during Afghanistan visit 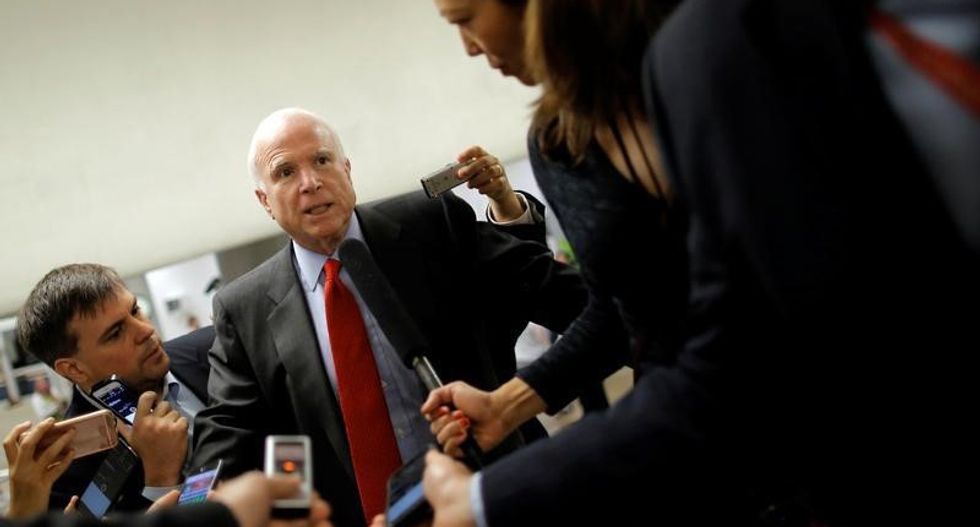 U.S. Senator John McCain (R-AZ) talks to reporters as he arrives at Capitol Hill in Washington U.S. May 10, 2016. REUTERS/Carlos Barria

A bipartisan delegation of U.S. senators visiting Afghanistan on Tuesday called for a new strategy from the Trump administration to turn the tide against an increasingly strong Taliban insurgency and end the longest war in U.S. history.

The delegation led by Senator John McCain was in Kabul on a regional trip that included two days in neighboring Pakistan.

The visit preceded an expected Trump review later in the month of the strategy for the United States’ longest war, now in its 16th year, a subject that was largely absent from last year’s presidential campaign.

Since the exit of most foreign troops in 2014, Afghanistan’s U.S.-backed government has lost ground to a Taliban insurgency in a war that kills and maims thousands of civilians each year and has made Afghanistan the second-ranking country in people seeking refugee status abroad last year, behind Syria.

McCain said in a Kabul press briefing on Tuesday at NATO-coalition headquarters that "none of us would say that we are on a course to success here in Afghanistan".

"That needs to change and quickly," added McCain, a sharp critic of Trump within their Republican party.

Warren, a Massachusetts Democrat, said she came to get "the view on the ground about what is happening" in Afghanistan.

"We need a strategy in the United States that defines our role in Afghanistan, defines our objective and explains how we can get from here to there," Warren said.

U.S. officials have told Reuters that Defense Secretary Jim Mattis will present Trump with strategic options for Afghanistan by mid-July.

Last month, Trump gave Mattis the authority to set American troop levels in Afghanistan, but as commander in chief Trump must sign off on an overall strategy for the war.

U.S. security officials have privately said the most likely options will be to increase training and air support by 3,000-5,000 troops for still-inexperienced Afghan security forces, while also tracking down al Qaeda, Islamic State and other global Islamist militants based in Afghanistan.

The commander of U.S. and NATO forces in Afghanistan, General John Nicholson, has said "several thousand" more foreign troops – mostly trainers - are needed to break a military stalemate with the Taliban.

In 2001, a U.S.-backed military intervention in Afghanistan toppled the Taliban regime, whose ultra-hardline interpretation of sharia (Islamic law) banned most women from public life and executed people not seen as sufficiently pious, such as men with beards not considered long enough.

More than 15 years later, about 13,000 U.S. and allied troops remain in Afghanistan as part of a training and advising mission in support of an elected government that has increasingly been losing ground to a Taliban insurgency that now controls or contests some 40 percent of territory.