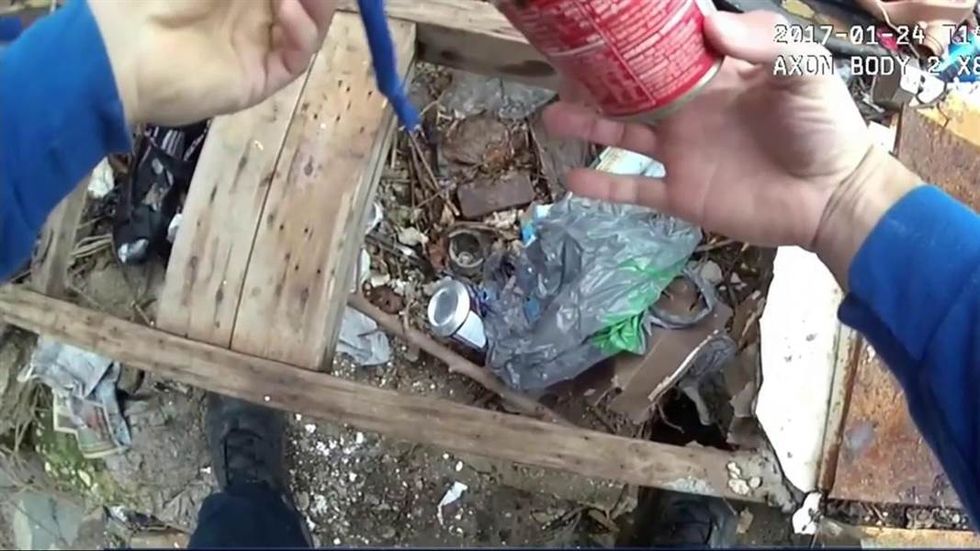 A body camera video appears to show a Baltimore police officer planting drugs in order to arrest a man for illegal possession, the Maryland Office of the Public Defender said on Wednesday.

The minute-long video released by the public defender's office shows the officer placing a small plastic bag in a trash-strewn yard as two colleagues look on. All three officers then walk out to the sidewalk.

The officer then returns to the yard and retrieves the bag filled with capsules. The capsules were filled with heroin powder, according to the arrest report.

One officer seen in the video has been suspended, while the two other officers have been placed on administrative duty, the Baltimore Police Department said at a news conference on Wednesday.

The department showed other videos on Wednesday, recorded the same day as the footage released by the public defender, that it said raised the possibility the officer genuinely discovered the drugs at the scene but inappropriately chose to stage and film a recreation of the discovery.

The public defender's office identified the officer handling the drugs in the video as Richard Pinheiro, and complained that he was a witness in dozens of other active cases. Pinheiro could not be reached for comment and the police department declined to say whether he had a lawyer.

The video resulted in a prosecutor dropping the criminal case against the man arrested for drug possession, the public defender's office said.

"There's nothing that deteriorates the trust of any community more than thinking for one second that uniformed police officers and police officers in general would plant evidence of crimes on citizens," he told reporters at a news conference on Wednesday.

One of the additional videos released by police from that day showed the officers arresting a suspected drug dealer, who appears to admit to the officers that he has marijuana and another unspecified drug on his person.

Another video shows a lengthy search of the yard, which police say the suspected dealer had identified for them, during which they appeared to find a bag filled with a number of capsules.

That video ends about five minutes before the apparent drug planting video was made.