WATCH: GOP senator gets nailed in the head with reporter's notebook 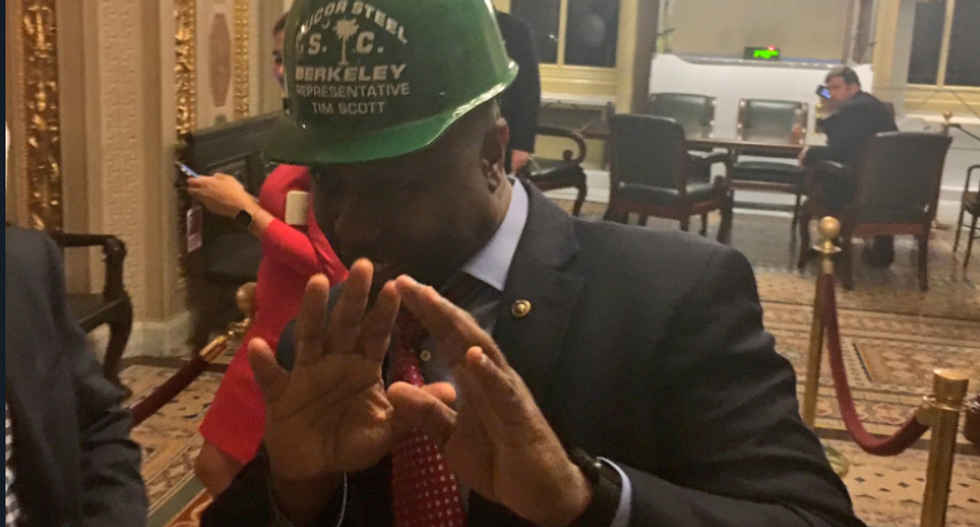 As the Republicans' latest attempt to repeal and replace Obamacare went down in flames early Friday morning, Sen. Tim Scott (R-SC) was hit with more than just the realization that his party’s 7-year long effort to strip millions of healthcare was, for the time being, defeated.

"Uh, something just fell from the gallery and hit Sen. Scott on the head as he was talking to Sen. [Ben] Sasse (R-NE)," eagle-eyed observer Michael Linden wrote.

Uh, something just fell from the gallery and hit Sen. Scott on the head as he was talking to Sen. Sasse.
— Michael Linden (@Michael Linden)1501217589.0

Shortly thereafter, Haley Byrd, a reporter for the conservative “social first” Independent Journal Review, revealed she “accidentally dropped” her notebook into the Senate chamber from the gallery above.

Byrd later reported she “apologized” to the Republican senator, who donned a helmet to prevent any further injury.

I just apologized to @SenatorTimScott in person for dropping my notebook on him. He's more prepared and has a helme… https://t.co/DMCpOAFAHW
— Haley Byrd Wilt (@Haley Byrd Wilt)1501221107.0

On the Senate floor, @SenatorTimScott gets hit by a reporters notebook that feel from the gallery above: pic.twitter.com/qmpyX4ZEdA