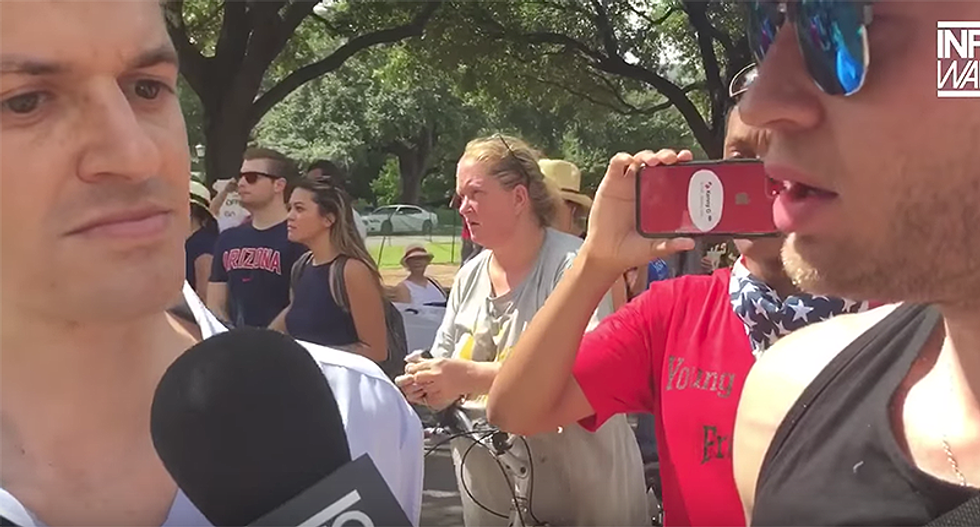 While shouting into a microphone at an "Impeach Trump" rally, Owen Shroyer hammered the candidate on foreign policy as the progressive answered questions calmly and respectfully.

Ultimately, Perri got the InfoWars interviewer to admit he didn’t agree with Trump’s actions on Syria and that Trump hasn't "drained the swamp" the way he said that he would. Shroyer also admitted that Trump demanded a loyalty pledge by former FBI Director James Comey, something the president and White House have denied.

The two then got into a long conversation about what constitutes "obstruction of justice," and Shroyer asked "but didn't Barack Obama obstruct justice" for not doing something fast enough on Russia. Perri explained that the former president wasn't under investigation for links to Russian hacks, so there wasn't an investigation to obstruct, and sanctions were eventually levied against the Russians by the Obama administration.

Once the discussion seemed to be lost, Shroyer quickly switched to talking about immigration.

Perri fought back about the implication that deportations make communities safer. He specifically cited cases in which the U.S. Department of Homeland Security Immigration and Customs Enforcement came into courtrooms where domestic violence survivors were being detained after serving as a witness for prosecutors.

"I thought Republicans cared about states rights," Perri said. "If you care about state's rights then when the state of Texas is prosecuting somebody and they need somebody to come in and testify, to have the federal government come in and arrest that victim. It sent waves of fear where the immigrant community won't even call the police."

"I'll agree with that," Shroyer said.

Watch their full exchange below: