'We thought he was the bright one': Bakari Sellers and Ana Navarro gang up on 'dropped on his head' Don Jr. 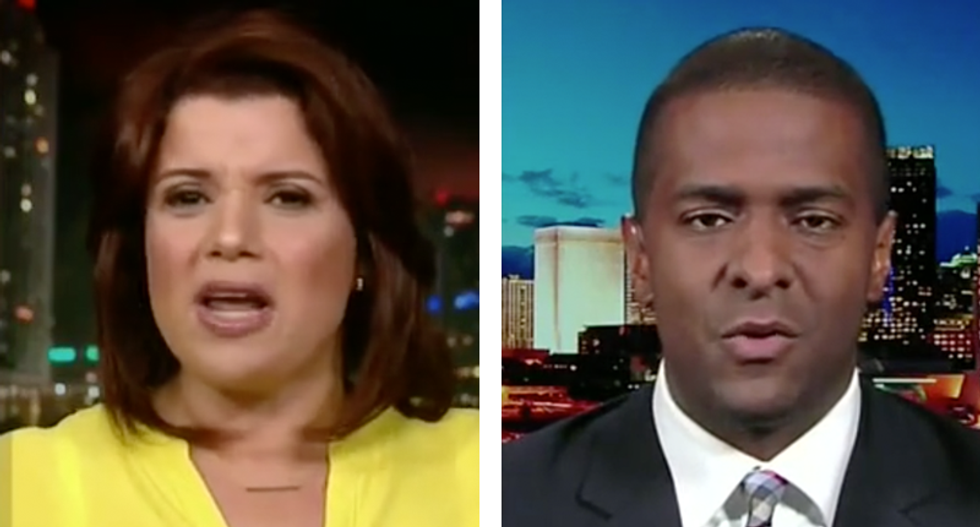 Ana Navarro on Monday eviscerated Donald Trump, Jr. after reports indicated he knew he was meeting with a Russian lawyer to obtain anti-Hillary Clinton information that came from the Russian government, asking, “this kid was dropped on his head as a child.”

Pointing out the irony of an email linking Trump Jr. to potential collusion with the Russian government, Navarro asked, “the plot thickens, doesn't it?”

“Now you understand why [Trump Jr.’s] story changed three times,” Navarro said. “When I read his statement, where he was admitting he had met with this Russian lawyer for the purpose of receiving information against Hillary Clinton, I thought: ‘My god, this kid was dropped on his head as a child.’ Could he possibly be admitting this?”

Navarro went on to explain Trump Jr. admitted it “because he knew there was an e-mail” that proved such a meeting took place, and that it was intended as a way for the Trump campaign to receive information about Clinton from Russian operatives.

“It is one thing after the other,” Navarro said. “The sheer amount of contact and meetings that none of them remember between Trump world and Russians involved with the Kremlin is astounding.”

“This stinks to holy hell,” she continued. “It’s time that Republicans stop thinking narrowly, and start thinking broadly, about defending the American democracy and the integrity of our elections.”

Navarro pointed to former Republican candidate Mitt Romney, who at one time identified Russia as the United States’ greatest geopolitical foe, asking what it would have taken for his team or family to seek such information against Barack Obama.

“This is happening because the Trumps think they are above the law,” Navarro declared. “Rules don't apply to them.”

“No one would imagine [the Trumps] would be a bumbling family … that would have this level of incompetence.

“We need Republicans to stand up and say: ‘Something is here,’” Sellers continued. “It's not just a bunch of smoke. The United States is burning down. And unless somebody realizes that and you have a kleptocracy who’s running the United States of America, and running rampant—and Donald Jr. is a perfect example. And to think many of us thought he probably was the bright one. Here we are today.”