'Why so many lies?’: Tapper shreds Trump Jr. for trying to create ‘moral outrage’ after Russia meeting 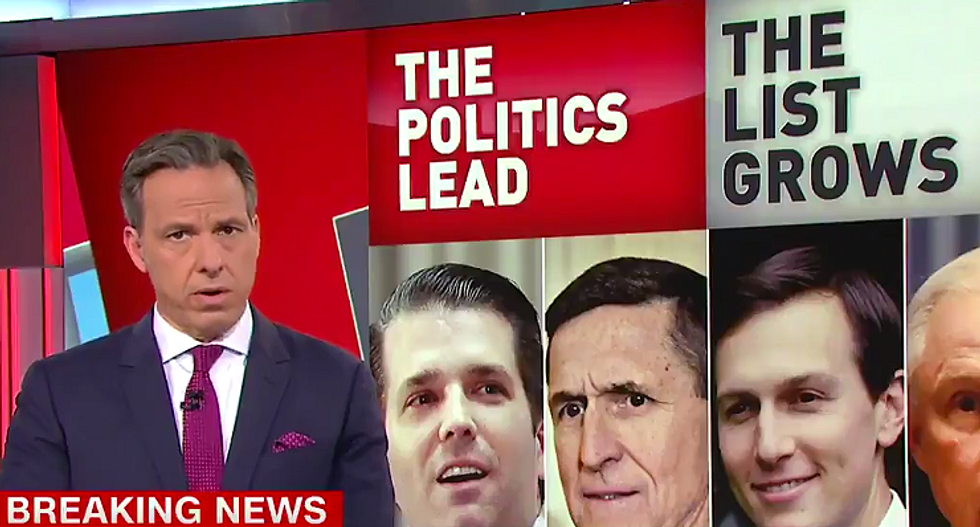 CNN’s Jake Tapper on Monday blasted Donald Trump Jr. and other former members of Donald Trump’s campaign after the president’s eldest son admitted to taking a meeting with a Russian lawyer with ties to the Kremlin during the 2016 election—with the explicit goal of obtaining dirt on former Democratic candidate Hillary Clinton.

Tapper noted Trump Jr.’s acknowledgment that he took the meeting after being “promised damaging information about Clinton” is “something of a reversal” from his original claim that the meeting was primarily about a Russian adoption program.

Tapper then played a video of Trump Jr. declaring, during the campaign, that accusations of Russian meddling were “so phony,” noting Trump’s eldest son was “quite dismissive of Clinton’s campaign manager blaming Russia” even after he was offered opposition research against his father’s opponent.

“That is quite a bit of moral outrage from someone who just weeks beforehand had met with a Russian lawyer who claimed to have damaging information about Hillary Clinton,” Tapper said.

The CNN host then turned to Vice President Mike Pence and Trump separately insisting that “to the best of their knowledge” no one from the campaign met with Russians.

“To the best of our knowledge, at least five former or current members of President Trump’s team have not only had some contact with the Russians, the have lied, changed their stories or not been forthcoming with information about those contacts with the Russians,” Tapper explained, naming former National Security Adviser Mike Flynn, former Trump advisor Carter Page, Attorney General Jeff Sessions, top White House advisor Jared Kushner and now, Trump Jr.

“If these contacts and conversations with Russians were so innocent—as is being claimed—the obvious question: Why so many lies about them?” Tapper asked.

.@jaketapper: If contacts & conversations with Russians were so innocent, as claimed, why so many lies about them? https://t.co/ytTEoWe8l6 pic.twitter.com/1BVSwxjcXw