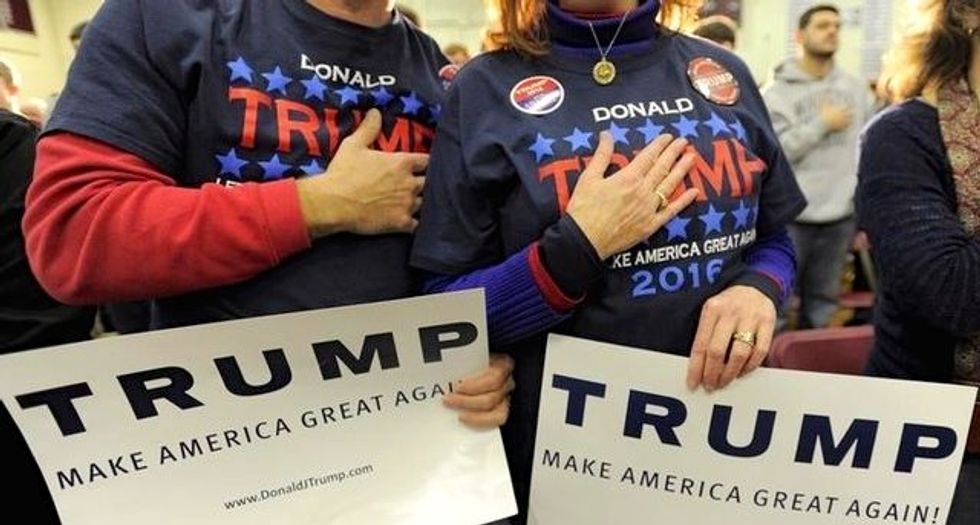 Supporters of U.S. Republican presidential candidate Donald Trump hold their hands to their chest as the national anthem is played at a campaign rally in Concord, New Hampshire January 18, 2016. REUTERS/Gretchen Ertl

According to a Yale historian, the rapid ascent of Donald Trump and all that he stands for, has historical echoes that perfectly mirror the rise of the Fascists and the Nazi's in 1930's Europe.

Writing for The Guardian, Timothy Snyder warns that conservatives seem to be unaware that Trump is taking their governing philosophy into darker -- and more violent -- territory.

"Stephen Bannon, who promises us new policies 'as exciting as the 1930s,' seems to want to return to that decade in order to undo those legacies," Snyder writes. "He seems to have in mind a kleptocratic authoritarianism (hastened by deregulation and the dismantlement of the welfare state) that generates inequality, which can be channeled into a culture war (prepared for by Muslim bans and immigrant denunciation hotlines)."

"Like fascists, Bannon imagines that history is a cycle in which national virtue must be defended from permanent enemies. He refers to fascist authors in defense of this understanding of the past."

Noting that President Trump is not an "articulate theorist," Snyder points out that the president gives Bannon's dark vision a populist veneer that has historical parallels.

"During the 2016 campaign, Trump spoke of 'America first,' which he knew was the name of political movement in the United States that opposed American participation in the second world war," Snyder explains. "Among its leaders were nativists and Nazi apologists such as Charles Lindbergh. When Trump promised in his inaugural address that 'from now on, it’s going to be America first' he was answering a call across the decades from Lindbergh, who complained that 'we lack leadership that places America first.' American foreign and energy policies have been branded 'America first.'"

"Conservatives always began from intuitive understanding of one’s own country and an instinctive defense of sovereignty. The far right of the 1930s was internationalist, in the sense that fascists learned one from the other and admired one another, as Hitler admired Mussolini," Snyder continued.

"One of the reasons why the radical right was able to overcome conservatives back in the 1930s was that the conservatives did not understand the threat. Nazis in Germany, like fascists in Italy and Romania, did have popular support, but they would not have been able to change regimes without the connivance or the passivity of conservatives."

"If Republicans do not wish to be remembered (and forgotten) like the German conservatives of the 1930s, they had better find their courage – and their conservatism – fast," the historian concludes.

In a recent debate over a law to ban the teaching of Critical Race Theory, Tennessee legislator Justin Lafferty (R) explained to his colleagues that the 3/5th Compromise of 1787, used to determine a state's representation in Congress by counting enslaved people as "three fifths of all other Persons," was designed with "the purpose of ending slavery." Lafferty had his facts spectacularly wrong, but that did nothing to derail the law's passage.

Anti-Critical Race Theory laws like the one passed in Tennessee – as well Texas, Iowa, Oklahoma, and Florida -- are not just aimed to push back against the heightened awareness of the nation's history of racial injustice in the wake of the popularity of the 1619 Project and last summer's massive protests over the murder of George Floyd. They are also attacks on educators -- and on expertise itself. As Christine Emba explained in a recent Washington Post article on conservatives' current obsession with Critical Race Theory, "disguising one's discomfort with racial reconsideration as an intellectual critique is still allowed." Not only is it allowed in these public debates, it is an effective strategy to curb movements for social change. It is also not new.