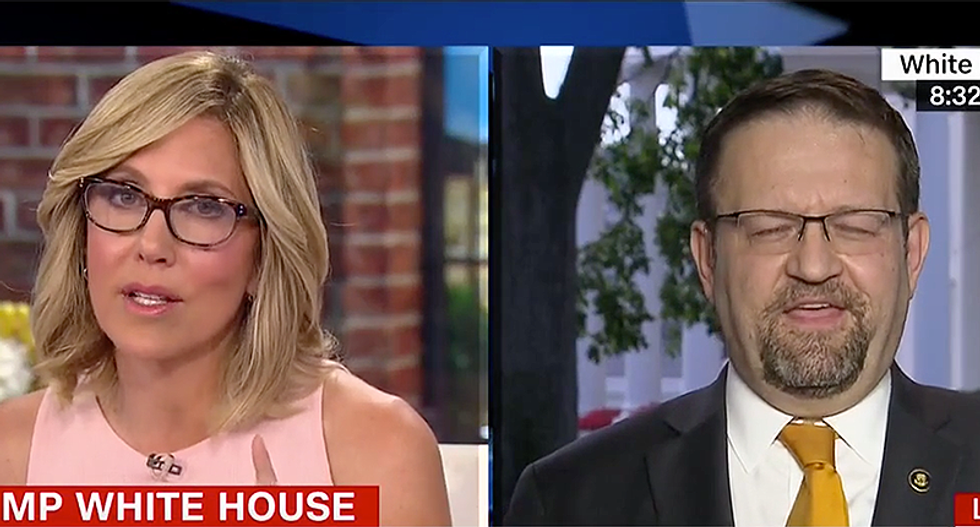 White House deputy assistant Sebastian Gorka downplayed that President Donald Trump didn't hold Russian President Vladimir Putin accountable for hacking the 2016 election. Instead, he said that Trump wasn't there to talk about the 2016 election but to save lives in Syria.

"He sent a very clear message ... this is not a court of law but a message was sent," said Gorka, a former member of a Hungarian ultranationalist group with ties to World War II-era Nazis. He did not, however, clarify what that message from Trump was on the hack.

Trump and Republicans criticized former President Barack Obama for what they felt was a soft response by asking Putin to "cut it out."

When asked about Donald Trump Jr.'s meeting with Russian attorney Natalia Veselnitskaya, Gorka pivoted to accusing staffers of Hillary Clinton of traveling to the Ukrainian Embassy to find opposition research.

"You're saying it's inappropriate for Democrats to meet with the Ukraine but not for Donald Trump Jr. to meet with Russia?" CNN's Alisyn Camerota asked/

"She was a private lawyer," Gorka said, claiming Veselnitskaya has no connection to Moscow.

"That's the interesting thing, Mr. Gorka, they wanted the dirt," Camerota said of the Trump staff. She went on to ask why Don Jr. lied when asked about it instead of being forthcoming if he did nothing wrong. She then threw up a graphic of six other Trump staffers who lied about meetings with Russians.

Gorka pivoted to claim CNN was dropping in the ratings behind Nick at Night's cartoons.

"I'm sure more people would rather watch House of Cards than what you're doing too," Camerota said before correcting what she said was inaccurate statistics. Gorka continued to claim CNN's ratings were terrible and the network was going down the tubes instead of addressing the question.

"Why didn't they adequately disclose," Camerota asked. Gorka claimed that Don Jr. was under no obligation to disclose anything as a private citizen. Camerota cited the others who also met with Russians. Gorka pivoted to attack former President Bill Clinton instead of addressing the question.

"And I'm responding to your lack of prioritizing in the interest if U.S. national security," Gorka said.

"But what is your answer to my question?" Camerota hammered.

"Is it possible Mr. Gorka that your team is obsessed with the Clintons?" Camerota said.

Gorka claimed that CNN isn't in the news business and only cares about attacking Trump.

Camerota asked why the Trump White House takes shots at CNN while simultaneously begging to come on the network that they attacked. Gorka claimed he needed to come on to defend a strong woman like Kellyanne Conway, who he said was attacked by the network on Monday.

Gorka never exactly answered the question. He simply said that nothing inappropriate ever happened and refused to address why the six other Trump contacts lied.

Camerota vs. Gorka Part 1 by sarahburris

‘Your team is obsessed with Clinton’: CNN’s... by sarahburris