'You're blaming me?' Chuck Todd nails Tom Price for claiming Trump's tweets are beneath dignity of TV news 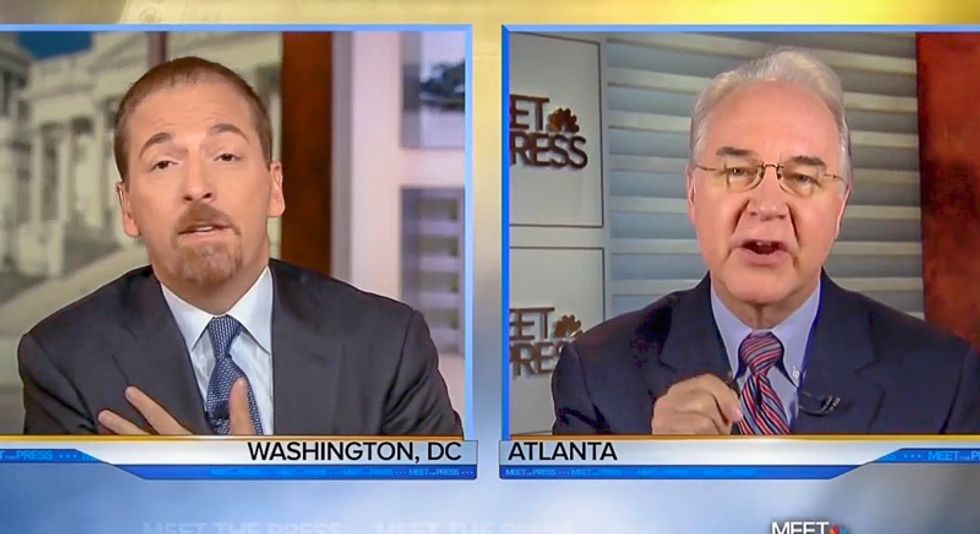 NBC host Chuck Todd called out Secretary of Health and Human Services Tom Price on Sunday for suggesting that the media had manufactured the outrage over President Donald Trump's recent Twitter messages.

During an interview on Meet the Press, the NBC host noted that many Republican leaders had called for the president to stop generating controversies on Twitter after he recently posted sexist insults about MSNBC host Mika Brzezinski.

"What I'm concentrated on is the job that he's given me," Price insisted.

Todd pressed: "If your son tweeted to a woman like that, what would you say to him?"

Price, however, dodged the question.

"The challenge that I've been given is to address the health care program," Price said. "And your program, a program with the incredible history of Meet the Press, and that's what you want to talk about?"

"I don't," Todd replied. "All due respect, you're blaming me for what the president of the United States has spent his entire week focused on?"

"No, listen to me," Price snapped. "With all due respect, the American people are talking about a health care system that is not providing choices, where premiums are going up... that's what I and the president are working on."

"Why isn't the president as devoted to this as you are?" Todd wondered.

"He can do more than one thing at a time," Price quipped.