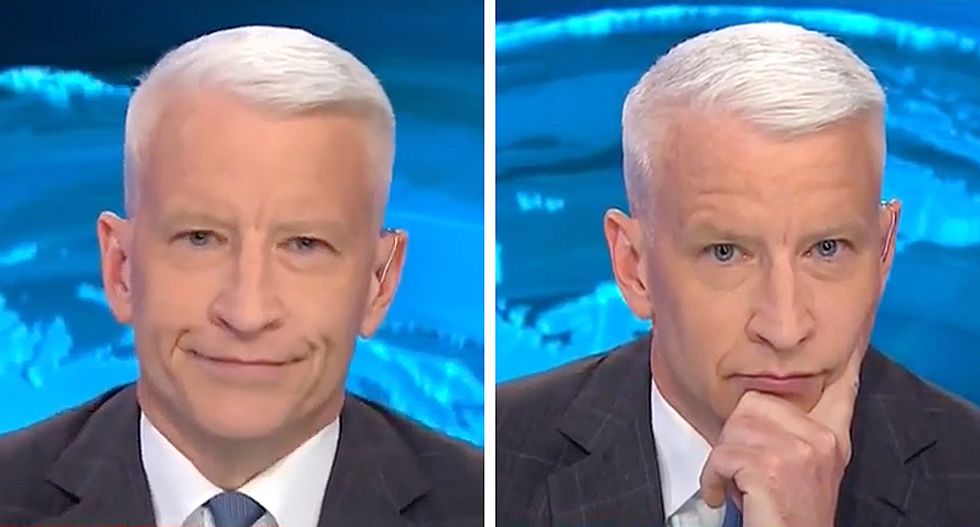 Cooper began his segment by fact-checking the president’s Wednesday-morning tweets, chief among them, Trump’s claim that he does not watch a lot of television.

“I have little time for watching TV,” Cooper read during Wednesday episode of “AC360.”

“He certainly watched Donald Trump, Jr. on Fox—and tweeted about it,” Cooper noted. The CNN host then turned to Trump’s assertion that the Russia probe is the “greatest Witch Hunt in political history.”

“The important thing to know about witch hunts is nothing ever comes of them—You never see a witch,” Cooper said. “But whatever you call the last several months, we've seen new, significant developments every week, sometimes seven days a week, which may explain why the White House is under so much pressure.”

CNN’s Dana Bash explained the president’s aversion to the Russia probe is “probably best encapsulated by a source who speaks with the president frequently,” who told the reporter that “any bit of news with the word ‘Russia’ in it [is seen by Trump] through one prism—and that is the fact that he considers that an attempt to delegitimize his election to the White House.”

Cooper then brought on Gorka, who began his interview by debasing the very network he was speaking on.

“Your chyron talked about a crisis,” Gorka told the CNN host. “Your reporter talked about a bunker mentality. I work in the West Wing, I work in the White House—it is absolutely nothing of the kind. We are pushing the ‘make America great again’ agenda. The president is a steam locomotive that will not be stopped. It's just fake news.”

Gorka went on to say he’s “sad” to see CNN participate in “salacious, sensational coverage for your ratings, so your corporate sponsors and owners will have more money.”

“But that's not media, it's just fake news,” Gorka added.

“Okay. I'm just going to ignore the insults, because I don't think it gets us anywhere,” Cooper replied.

Gorka insisted his comments weren’t about Cooper, but were instead a question of where "the Walter Cronkites of yesteryear" are. Gorka added it’s “quite sad” to see what the media has become.

Bypassing Gorka’s incediary comments, Cooper continued, “So the president tweeted today, ‘When you hear the words, “sources say” from the fake media, often times those sources are made up and do not exist.’ I'm wondering how the president can make that claim when all the reporting by the New York Times have been proven by his son's own emails.”

Gorka said it’s the same thing as the “unnamed sources that said [former FBI Director] James Comey” was going to testify he never told the president the FBI was not investigating him.

Cooper explained that CNN reporters corrected themselves–something the White House never does–adding, “I’m giving you an opportunity right now to correct what the president said this morning, because what he's alleging is that the reporting is fake, and in fact, his son's own email chain shows that it's accurate. Do you deny that?"

Gorka shot back that Russia is an “obsession,” before adding he stands “by what the president and his son said."

"We are impressed by Don Jr.’s transparency and the fact that he published these emails," Gorka alleged.

“He only published them because the New York Times got them and was going to publish them,” Cooper noted.

Gorka insisted Russia “only has legs because the fake news industrial complex is obsessed” with it, whereas no one in the “fake news media” cares that the Democratic National Committee received information from the Ukraine.

“That's what CNN should be covering!" Gorka charged. "But why aren't you?”

“You're avoiding answering the question about Donald Trump's lack of transparency,” Cooper persisted.

Cooper pointed out Trump Jr.’s story about his meeting with a Russian lawyer changed repeatedly, while Gorka tried in vain to convince the CNN host that Trump’s eldest son gave correct information.

“I thought we were going to talk about real issues, like what we're doing with our allies in France,” a heated Gorka replied.

“Are you a TV producer now?” Cooper shot back.

Gorka later went on a rant about CNN being “behind Nick at Nite” in the ratings, and at one point asked Cooper if he understand the word “initiate.”

Watch the amazing exchange below, via CNN: