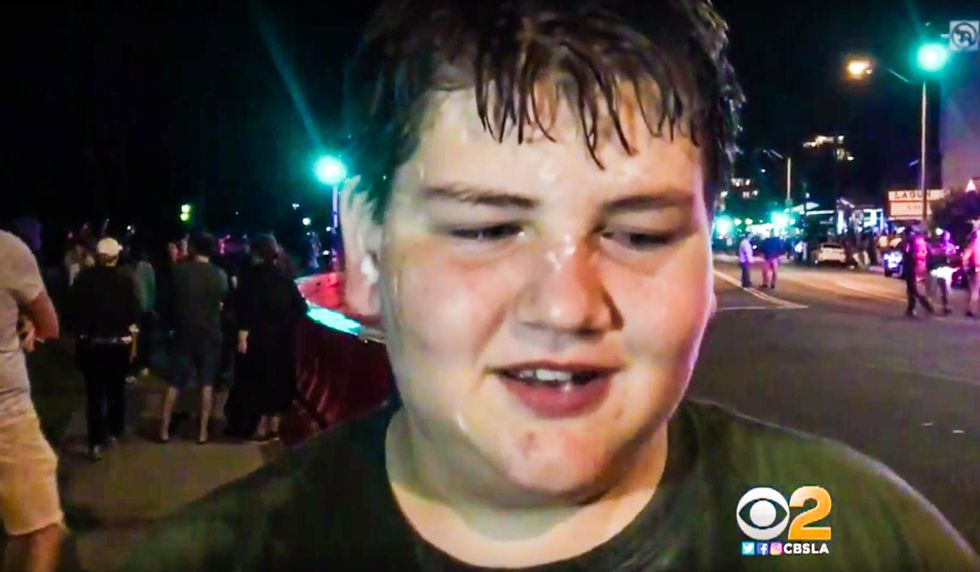 A 12-year-old boy who was pepper sprayed at an anti-immigration rally in Laguna Beach, California (Screen cap).

Three people were arrested on Sunday night during an anti-immigration rally in Laguna Beach, California, in which a 12-year-old boy got hit with pepper spray.

Local news station ABC 7 reports that the anti-immigration demonstration in Laguna Beach grew violent when counter-protesters confronted the demonstrators, who were there as part of a rally organized by a group called "America First."

"News video showed some punches being thrown amid scuffles as the two sides confronted each other, but it was unclear what charges the arrestees might possibly face," ABC 7 reports.

The "America First" demonstrators were significantly outnumbered by counter-demonstrators, who went to support immigrants' rights.

A 12-year-old boy who came to the rally simply to check it out described to local news station CBS Los Angeles how the confrontation began.

"People started yelling and I got up, and I just started getting pushed to the center," he said. "And yeah, I just got pepper sprayed."

Even though the event was not explicitly a white nationalist event, it did attract one man with swastika tattoos who told CBS Los Angeles that he was there to protest immigrants who "expect us to pay for everything" they need.

Watch a video on the rally below.