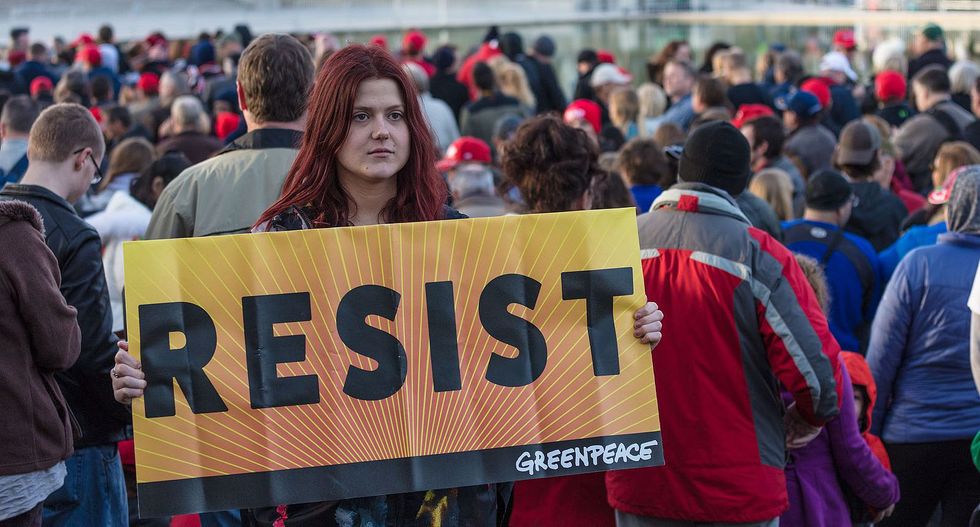 In a letter to Donald Trump on Friday, 16 of 17 members on the committee on the arts and humanities resigned in protest after the president used a Tuesday press conference to equate white supremacists in Charlottesville, Virginia with counter-protestors who stood against racism and bigotry.

The committee also included a subtle call for citizens to “RESIST”—spelling out the battle cry in the first letter of each paragraph.

“Reproach and censure in the strongest possible terms are necessary following your support of the hate groups and terrorists who killed and injured fellow Americans in Charlottesville,” the first paragraph begins. “Elevating any group that threatens and discriminates on the basis of race, gender, ethnicity, disability, orientation, background or identity is un-American,” the second reads.

“Speaking truth to power is never easy, Mr. President,” the statement continues. “Ignoring your hateful rhetoric would have made us complicit in your words and actions,” the commission wrote in the fourth paragraph.

“Supremacy, discrimination and vitriol are not American values,” the fifth reads. “Thank you.”

“Resist” has become a catch-phrase for the anti-Trump movement. In February, the New York Times interviewed leaders of “The Resistance” to find out what the battle cry means to them.

“On Nov. 9, 2016, thousands came to our doors and website saying: ‘Que paso? What do we do now?’ Enrique Morones, executive director and founder of Border Angels told the Times. “Resist, we told them. Be informed about your rights, join the masses, register to vote or get others to vote.”

Several members of the commission resigned after Trump won the election in November. The remaining said they would stay on to advise the president, but began discussing disbanding the council after Trump’s Charlottesville remarks. The commission reportedly spent several days crafting their resignation letter.

Dear @realDonaldTrump, attached is our letter of resignation from the President's Committee on the Arts & the Human… https://t.co/KZSBDzvAYP
— Kal Penn (@Kal Penn) 1503065334.0