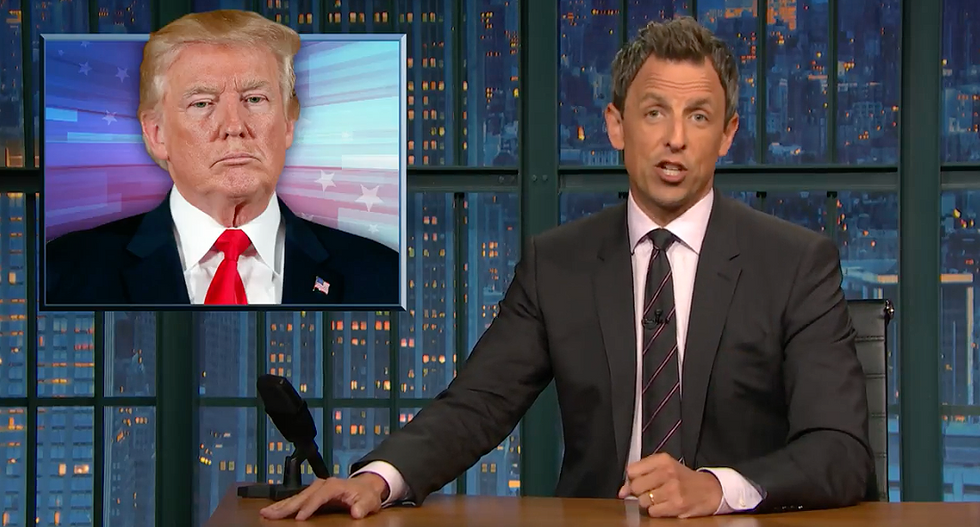 “After being pressured into reading a carefully-scripted statement denouncing Nazis on Monday, President Trump has spent the rest of the week showing us who he really is, and—this is exciting—a lying racist,” Meyers said during “A Closer Look.”

Meyers pointed out that after his forced press conference Monday, Trump was “itching to tell us how he really felt,” adding his aides and all civilized people “had to spend two days shaming him into reading a carefully-orchestrated statement saying Nazis are bad.”

Referring to the president’s claim that some “good people” were present in Charlottesville over the weekend to protest the removal of a Confederate statue of Robert E. Lee, Meyers explained, “no one gets accidentally caught up in a white supremacist rally.”

“What sort of twisted logic would tell a person that the Nazis who show up to wave Nazi flags are somehow equivalent to counter-protestors?” Meyers asked, playing a clip of the president claiming only the white supremacists had permits to protest.

“Oh the Nazis has a permit? F*ck me! I’m sorry,” Meyers joked. “Nazis’ one thing is having your papers, that’s the one thing they’re good at.”

The “Late Night” host then went all in on Trump.

“Is Donald Trump a racist?” Meyers asked. “I’ll let you decide ‘yes’ for yourself. But Trump isn’t just a racist, he’s also a narcissist. He defends the white nationalist movement both because he’s racist and because they show up and they chant his name and they show him love. And his brain disease makes it impossible for him to denounce anyone who supports him.”

“What Tuesday showed is that Donald Trump will never change,” he continued. “He showed us again who he really is: a lying racist who’s desperate for praise.”