'A misogynist, racist, bigoted pig is in the White House!': Ana Navarro unloads on Trump and his apologists 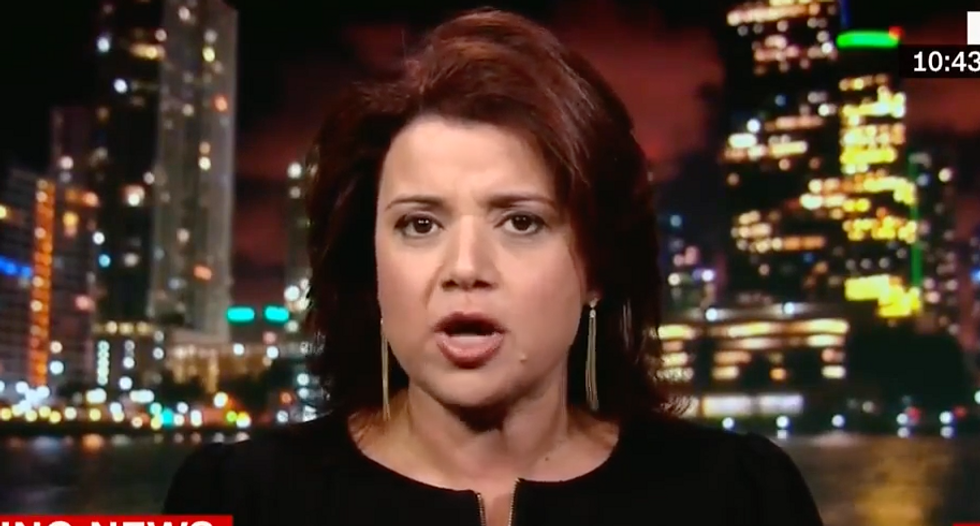 CNN’s Ana Navarro on Tuesday went off on Donald Trump, arguing if he cannot stand for people of every color and creed, he “should not be president.”

Navarro was speaking with former Arizona Gov. Jan Brewer and CNN’s Don Lemon about the president’s incredible press conference, where he equated neo-Nazi’s with the counter-protestors standing against bigotry and white supremacism.

Brewer claimed Trump “took the bull by the horns” Tuesday, arguing the real issue is the “relentless reporting and this relentless attacking of him.”

“I thought his speech on Saturday was fine,” Brewer said. “I thought the one on Monday was terrific. I thought today he came forward and spoke from his heart.”

“No one ever talks about the left,” she later added, echoing Trump’s sentiment.

Asked to respond to Brewer, Navarro went off.

“Honestly, I don't have anything to say to her,” Navarro replied. “Look, I think that Trump apologists are going to justify and pretend the things he says did not happen. And so I frankly think that it's a waste of time and useless exercise to try to convince them otherwise."

"So let me, instead of talking about that, let me talk to Donald Trump, and explain to him that as president of the United States, he represents blacks and jewish people and hispanics and people of every color and every creed," she continued. "And it is his job as president of the United States to stand up for each and every American, to stand up vertically against racism and bigotry.”

“Pedaling to racism is just as bad as being a racist,” she added. “Donald Trump is either a racist or peddling to it, and both are frankly unacceptable and make him unfit to be president of the United States. If you can't be president, if you cannot stand up and represent Americans, you should not be president.”

Navarro then turned her fire on fellow Republicans speaking out after Trump’s presser. “My question is: what the hell took you so long? When someone shows you who they are—the first time—believe them. For too long, Republicans in Congress, elected leaders, have looked the other way while a misogynist, racist bigoted pig is in the White House.”

No piece of legislation, no bone that he may throw on policy, no regulation is worth cheapening the office of the United States this way,” she added. “It is breaking us apart.”

Navarro implored Republicans to “stand up” and “grow a spine,” arguing she’s “tired of hearing Republicans say they're disappointed and disturbed by something he says.”

“Do not stand next to him until he starts behaving in a presidential manner,” Navarro counseled. “And if he cant, you have to confront him over, and over and over again.”

Navarro later explained why Trump’s comments Tuesday were par for the course.

“The harm he is causing this country is just too great to look the other way,” Navarro said. “And many people thought that when he entered the Oval Office, he would become presidential, that the magnitude of his office would make him change and become a presidential figure … He is not going to change, and it is time that Republicans start realizing that and stop giving him a damn chance. He's not going to change. He will continue embarrassing us and making us feel ashamed.”

Brewer argued Navarro’s remarks were just “sour grapes,” and that “nobody is going to say that the Ku kKux Klan carrying Tiki lights are good people.”

Lemon pointed out the president said just that. “He said there were some good people in there,” the CNN host reminded Brewer. Navarro tried to jump in and say something, but was cut off by the former governor.

“Please give me the same respect I’ve given you which has taken enormous restraint on my part,” Navarro insisted.

“This is pain,” Navarro told Brewer. “This is pain over what is happening in the United States of America. America, a home that has raised me and is my homeland.”

Reza Pahlavi, the son of Iran's last shah, believes the clerical state that toppled his father is on the brink of crumbling. What Iranians need now, he says, is stronger support from the West.

As ultraconservative Ebrahim Raisi was sworn in Tuesday as the eighth president of the Islamic republic, Pahlavi, who lives in exile near Washington, pointed to an election turnout rate of 48.8 percent, the lowest since the 1979 revolution, as well as demonstrations first triggered by serious water shortages.

A police officer was killed at the Pentagon's mass transit terminal Tuesday in an incident that forced the lockdown of the US military headquarters, the Defense Department said.

Employees in the Pentagon building in Arlington, a suburb of Washington, were ordered to shelter in place for more than an hour after gunfire erupted in the bus and subway station just yards (meters) from the entrance.