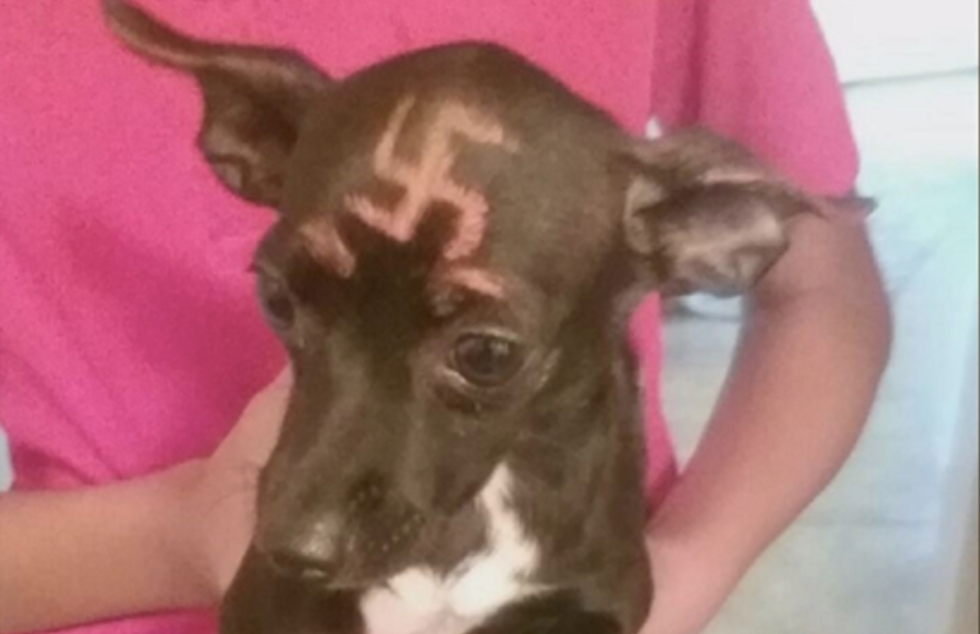 A dog in Phoenix, AZ whose owners painted a swastika on its head (KPNX)

An Phoenix, AZ woman was shocked when her neighbors' dog turned up at her door with a Nazi swastika painted on its head.

Phoenix's KPNX said that the woman -- who asked to go unnamed -- was immediately seized with fear due to the fact that she is of Hispanic heritage and her adopted children are racially mixed.

The woman's cousin Sally Andrade spoke with Channel 10 and said that the recent surge in racist violence in the U.S. made the moment particularly chilling.

“She’s thinking, ‘What is this?’” Andrade said. “’Is this a message towards me? I have to protect my family.’”

The woman contacted animal control and the local police who returned the dog to its owners, who said they'd painted on the symbol as a joke.

While the owners were young people, authorities said, the dog did not appear to be abused.

Carlos Galindo-Elvira -- regional director for the Anti-Defamation League in Arizona -- told KPNX that he understands the homeowner's fear.

“Certainly, it brings fear, and there is a cause for concern. This is a symbol used by neo-Nazis, by skinheads and by white supremacists,” Galindo-Viera said. “To find a dog in your neighborhood with that symbol on its head could be scary."

Andrade said the family is still uneasy, "We don’t know where this is headed. It could've been a joke to the kids. If it is, where is it going to lead next?"

"It’s not a joke. It’s not funny,” Galindo-Elvira said. “It’s hurtful, and it can become harmful.”