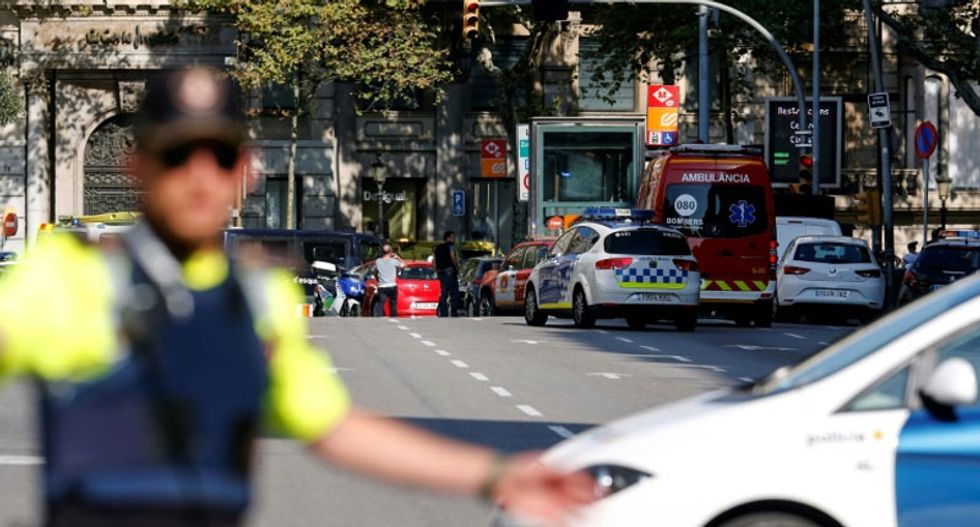 At least 13 people were killed Thursday when a driver deliberately slammed a van into crowds on Barcelona's most popular street in what police said was a "terror attack".

The attack, the latest in a wave of vehicle rammings across Europe in recent years, caused panic on the streets of Spain's largest city and drew condemnation from world leaders.

"We can confirm there are 13 dead and more than 50 injured," regional interior minister Joaquim Forn said in a tweet.

Catalan police said they had arrested one suspect, and denied earlier reports that the perpetrator was holed up in a bar near the scene.

The famous Las Ramblas is one of Barcelona's busiest streets, lined with shops and restaurants and normally thronged with tourists and street performers until well into the night.

Police said there had been a "huge collision" between a van and pedestrians on the thoroughfare and a police source said officers were seeking a total of two suspects.

Spain's royal family condemned the assault in unusually strong terms, vowing that their country would not be "terrorised" by extremists.

Witnesses spoke of a scene of carnage, with bodies strewn along the boulevard as others fleeing for their lives.

"When it happened I ran out and saw the damage," local shop worker Xavi Perez told AFP.

"There were bodies on the floor with people crowding round them. People were crying. There were lots of foreigners."

Witness Aamer Anwar told Britain's Sky News television that he was walking down Las Ramblas, which he described as "jam-packed" with tourists.

"All of a sudden, I just sort of heard a crashing noise and the whole street just started to run, screaming. I saw a woman right next to me screaming for her kids."

Spain had so far been spared the kind of extremist violence that rocked nearby France, Belgium and Germany.

But it was hit by what is still Europe's deadliest jihadist attack in March 2004, when bombs exploded on commuter trains in Madrid, killing 191 people in an attack claimed by Al Qaeda-inspired extremists.

Ethan Spibey, a charity director on holiday in the city, said he and several others had locked themselves in a nearby church after Thursday's van ramming.

"All of a sudden it was real kind of chaos... people just started running screaming," he told Sky. "There was kind of a mini stampede."

Local Tom Gueller, who lives on a road next to Las Ramblas he saw the van speeding along the boulevard.

A Greek diplomat in the city said three nationals had been wounded -- a woman and two children -- without providing details.

"The United States condemns the terror attack in Barcelona, Spain, and will do whatever is necessary to help," US President Donald Trump tweeted.

France's President Emmanuel Macron -- whose country witnessed a similar horror when a Tunisian man ploughed a 19-tonne truck through a crowded boulevard in Nice, killing 86 people in July 2016 -- said his thoughts were with the victims of the "tragic attack".

A spokesman for German Chancellor Angela Merkel condemned the "revolting attack" and British Prime Minister Theresa May said on Twitter that London "stands with Spain against terror".

The Nice carnage and other assaults including the 2015 Paris attacks were claimed by the Islamic State jihadist group.

In another deadly vehicle attack in December, 12 people were killed when a man driving a truck ploughed into a crowd at a Berlin Christmas market.

Spain has emerged as a potential target for jihadists, with extremist websites mentioning it for historical reasons, since much of its territory was once under Muslim rule.

But they publicise every arrest of alleged jihadists, most of them detained for propaganda, recruitment for extremist groups or "glorifying terrorism."

According to the interior ministry, more than 180 "jihadist terrorists" have been arrested since 2015.