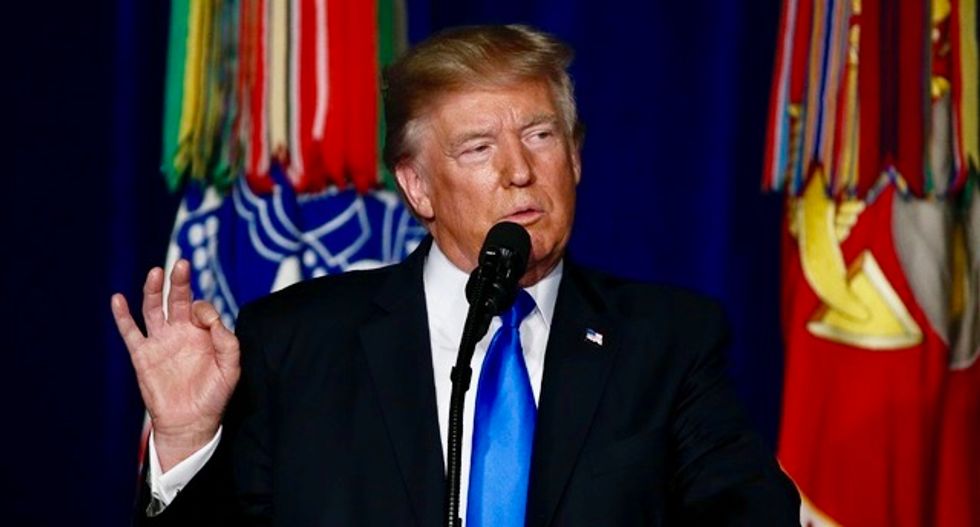 FILE PHOTO: U.S. President Donald Trump announces his strategy for the war in Afghanistan during an address to the nation from Fort Myer, Virginia, U.S., August 21, 2017. REUTERS/Joshua Roberts

Large protests could greet President Donald Trump on Tuesday when he travels to Arizona for his first campaign rally since he caused an uproar with his remarks about a white nationalist demonstration in Virginia.

Phoenix Mayor Greg Stanton, a Democrat, asked the Republican president to postpone Tuesday's event scheduled for 7 p.m. MST (0200 GMT on Wednesday) in light of his response to the street battles that broke out earlier this month at a protest against the removal of a Confederate statue in Charlottesville.

Trump was widely criticized for blaming both white nationalists and counter-protesters for the violence at the rally organized by neo-Nazis and white supremacists.

"America is hurting. And it is hurting largely because Trump has doused racial tensions with gasoline," Stanton wrote in the Washington Post. "With his planned visit to Phoenix on Tuesday, I fear the president may be looking to light a match."

Several anti-Trump demonstrations are planned for Phoenix, according to social media postings by local activists.

Some White House officials privately expressed concern on Monday about Trump's Phoenix rally, fearing he might revisit the Charlottesville issue in the heat of the moment while cheered on by thousands of supporters.

Trump has railed against the media coverage of his remarks, saying on Twitter that news outlets "totally misrepresent what I say about hate, bigotry."

It will be Trump's first trip as president to Arizona, which he won in the 2016 election. He will also visit a border protection facility in Yuma, Arizona, along the U.S.-Mexican border as he seeks congressional funding for the wall he wants built..

Republican Governor Doug Ducey told the Arizona Republic on Monday that he would welcome Trump on the tarmac when he arrived but would not attend the campaign rally. Instead, he said he would be focused on ensuring the safety of the event.

Trump has clashed with Arizona's two Republican U.S. senators, John McCain and Jeff Flake, on various issues. Both lawmakers are critics of the president.

Last week, Trump in a tweet called Flake "WEAK on borders, crime and a non-factor in Senate. He's toxic!" and appeared to endorse Kelli Ward, Flake's Republican challenger in his 2018 re-election race.

Trump said earlier this month that he was considering pardoning Joe Arpaio, the former Arizona sheriff found guilty of criminal contempt for violating the terms of a 2011 court order in a racial profiling case.