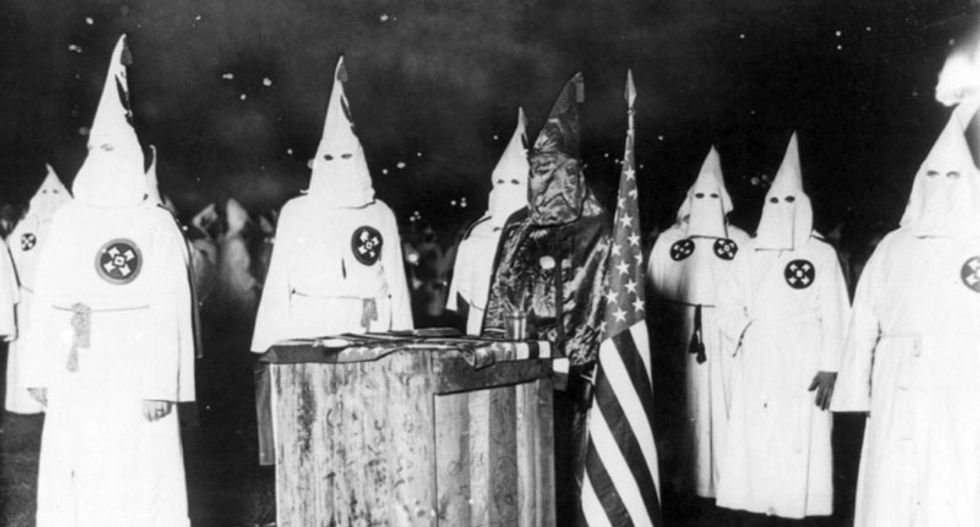 KKK gathering circa 1920 (Library of Congress)

Despite integrating schools, black students were forced to participate in racist hazing rituals that invoked imagery from the KKK for decades.

An alarming report from the Atlanta Journal-Constitution revealed disturbing photos of black students in whiteface, wearing hooded robes with nooses hanging around their necks.

When Lori Morton was at Wesleyan College in the early 1990s, she was roused from sleep in the middle of the night and taken with fellow students. A figure wearing a purple robe and hood emerged. She was so scared that even decades later, she still has post-traumatic stress.

“I remember being absolutely terrified,” Morton said. She now works as a family therapist and is a minister in Fort Lauderdale, Florida. “I didn’t know what was going on.”

Her experience was part of a hazing ritual used to initiate new students at the college. It dated back to nearly 100 years at the time, when the school was all white and included KKK customs in class names and rituals on campus. The AJC previously researched the disturbing past of the school's Klan ties, and since the story, students have come forward with even more horrifying stories.

Morton said she had nightmares about the incident for years. She would "hear" the drums that played that night. Then a loud pounding on her door. The door would open and she'd see someone standing in the darkness in a robe with a noose.

“That moment was the living embodiment of everything that I had been taught as a young black child about what the black experience had been in America,” she said. “I never thought I would come face to face with somebody wearing a robe and a noose telling me, ‘Silence and come on.’”

After the week-long ritual, known as "Rat Week," the students were given a noose and a potted plant as a token that they'd made it through the process. Angel Robinson, another student from the class, remembers being disgusted and brought the noose home to her family. They burned it in her kitchen sink. Some friends of hers decided to leave the school after the hazing. She became part of a group that pressured the school to end the tradition, pledging that it would never happen to anyone again.

“People … found their voice to go to the president and the administration to talk and talk and talk until somebody would listen,” she said.

Women have come forward on social media and via telephone sharing stories of their difficult years at the oldest women's college in the United States. As a result, the school has been forced to disclose they knew of the rituals and acknowledge the hazing persisted for many many years after. In fact, Wesleyan President Vivia Fowler learned that the "hurtful" initiation activities went on until 2013.

Some former students are also admitting that they were too young to understand what was happening and they're embarrassed they didn't recognize the traditions as racist. The hangman's noose was frequently used by the KKK as a means of intimidation for African Americans. As the Anti-defamation League explains, the noose threatened of a lynching if black Americans didn't behave the way the KKK thought they should. The purple robe is often worn by an officer in the KKK to signify leadership, while members wear the white hooded robes. Being rounded up in the dead of night was a tactic used by the Klan before a lynching.

To those black Americans who grew up during a peak time of the KKK's influence and power, these things signified an impending murder. To do it to students was likely traumatizing. This "tradition" was sanctioned by school officials for decades.

“What happened during the (initiation rituals) was not okay,” 1994 graduate Holly O’Reagan said. “I had the privilege of naivete to not recognize the symbolism as I’m a white woman. Some of my sisters did not have that privilege. They knew exactly what all that stuff meant.”

Klan symbols first appeared at the school as early as 1908, according to local news reports with photos showing students in hoods and masks. The story explains that they inducted two "unfortunates" into the class, which called itself the Ku Klux Klan. The 1913 yearbook even called itself "Ku Klux" and there were classes named Tri-Ks or Tri-K Pirates. Photos that date back to the 1950s show students in black or whiteface wearing the nooses. Some photos even show effigies hung by the neck. The nooses and robes were then passed down over the years from student to student. Some even had ribbons on them with the student who owned it and the class year.

The worst part is that students reported the hazing, but they continued as late as 2013. In 1972, a group of women called "The Fast Five" were the first African-American students to graduate, but when they started their first day of class in 1968 the school paper ran a cartoon showing a frightened student looking at a noose. The caption reads "Welcome Freshmen!"

While those students entered in 1968, one student of color tried to attend classes in 1966 but dropped out.

“The records we found do not indicate why she left,” history professor Karen Huber said.

The school has scrubbed their website of the unfortunate history.

U.S. Magistrate Judge Zia M. Faruqui released an accused insurrectionist to go on vacation after she spent and night in jail and then verbally agreed to the court's conditions.