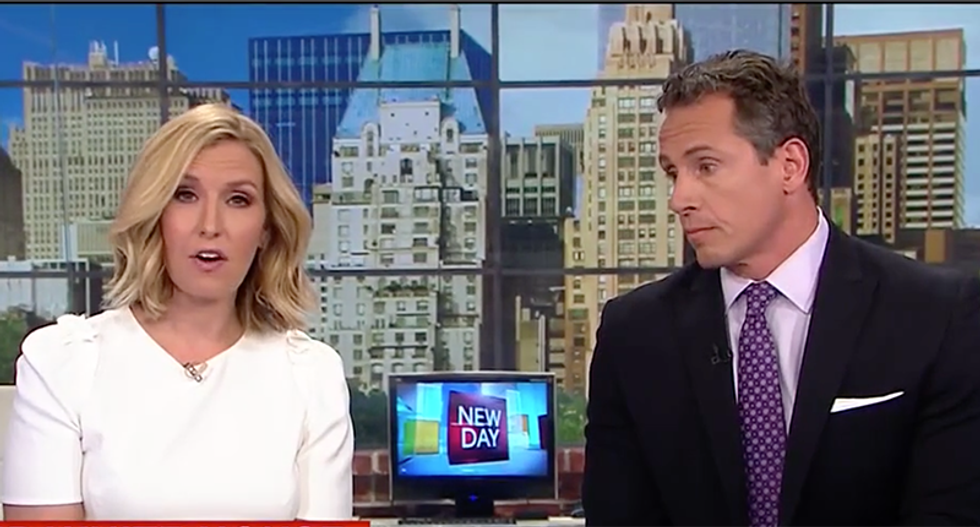 CNN co-host Poppy Harlow, filling in for Alisyn Camerota for "New Day," blasted President Donald Trump following a heated interview with Symone Sanders, host Chris Cuomo and Bruce LeVell. She alleged that Trump could have been calling the mother of the woman killed in Charlottesville, Virginia Tuesday instead of arguing with reporters.

LeVell, a Georgia businessman and Trump adviser, attempted to spin President Donald Trump's argument that the left was to blame for showing up to the rally at all. He alleged that they came with riot gear and bats. Sanders cut in to say that that the right came with Nazis and white supremacists and literally killed a person. LeVell argued that the right had a permit, however the city doesn't issue permits to run into a crowd of people with a car.

During a filibuster, LeVell attacked Sanders for trying to cut in on him after he refused to yield to allow anyone else to speak. He claimed that he didn't talk over her, however, he never actually gave her an opportunity to speak at all.

That's when Cuomo cut in.

"Bruce, a different moral proposition here," Cuomo began. "The facts about what happened there, I have to tell you, they don't line up well for the president. Yes, they had a permit. You can research who got that permit and what it was for and whether or not it was legitimate. You know the municipality fought hard to move the sitist of the demonstration and it was resisted by the Nazis and a a judge wound up siding with them. That's probably one of the biggest motivating factors for the violence is where it was held. More importantly, if you want to play with the facts, not only is the video clear that you had hateful people, who, by the way, want each of us on this panel eradicated, Bruce. That's what they're there to espouse, they don't want you to exist, don't want Simone to exist. They don't want me to exist. They were cited for unlawful assembly because of how they were protesting, how they were assembling. So those are the facts."

Cuomo went on to ask why the white supremacists were celebrating Trump saying that he got it right.

The conversation devolved into accusations about Trump's alignment with white supremacists. LeVall swore that Trump was not and any implication is wrong. During an interview with Jake Tapper, Trump finally admitted that he denounced David Duke, which LeVall used as a reason that Trump wasn't a racist. Cuomo alleged that Tapper "had to pull it out of him like a rotten tooth." LeVall claimed the "bad ear piece" excuse, which prompted Sanders to laugh.

LeVall continued to maintain that everyone was wrong across the board.

"You go back to your family, who fought for civil rights and you ask them if they feel that everybody there on that floor was equal," Cuomo told LeVall.

"They'll tell you not to give it life, too, Chris," LeVall shot back.

"Well, then tell the president, that's what he did," Cuomo retorted.

Harlow noted, "he did it. He fought with reporters over it instead of calling the mother of Heather Heyer yesterday."

'He fought with reporters over it instead of... by sarahburris