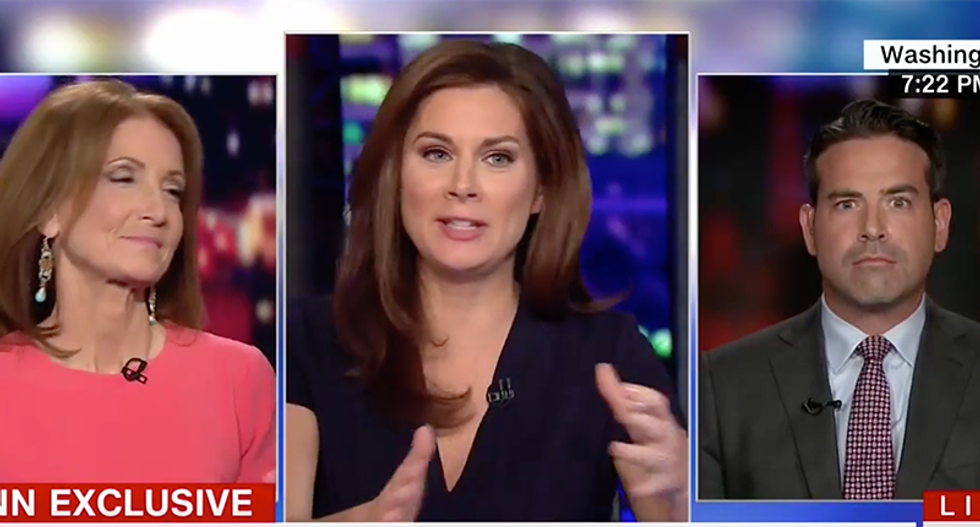 CNN Host Erin Burnett and former Rep. Nan Hayworth (R-NY) got into a heated discussion when the former Congresswoman tried to pivot to Benghazi when Burnett brought up the Russia scandal.

It was revealed Friday afternoon that the FBI ran a kind of "war room" of agents and analysts monitoring a feed of fake news it saw coming out of Russian bots on Election Day. It was also found in March that the bots targeted Trump because it was well known he would repeat fake news.

"This is a really important one," Burnett said. "Because ... we don't know if this affected the outcome of the election."

She asked if it impacted the election and former Hillary Clinton press secretary Brian Fallon said that at this point no one really knows.

"It may very well just be that," Fallon said. "But we have heard testimony in the months since the election from FBI counter intelligence officials that have talked about the sophistication with which the Russians mounted this campaign. They didn't just write these fake news stories. They had a sophisticated army of Twitter bots and other adopted personas on line that described themselves as midwestern blue collar voters so people would share it and believe it if you thought it was your neighbor down the street when it was really somebody operating out of eastern Europe."

Hayworth was shaking her head. Burnett called her out on it wondering why President Donald Trump can't admit that these bots helped him. They also were able to manipulate Bernie Sanders supporters during the primary.

"Because there is no evidence that the president endeavored to engage the Russians in helping him," Hayworth said.

"OK, but that's not the point," Burnett replied. "He still doesn't admit they tried to help him."

"Again, you're changing the conversation. I don't want to talk about Benghazi," Burnett called out Hayworth. "I did a whole hour long documentary about Benghazi."

Hayworth shot back that Clinton can't cry "fake news" when Hayworth claimed that she used it. The reference was that the instability in the area lead many to believe that the protests a several miles away were connected to the attacks on the embassy. They were found not to be connected, but the U.S. intelligence wasn't revealed until days after the fact.

"What's the matter with just focussing on this issue?" Burnett asked. "I'm freely willing to admit that I can't say that this changed the result of the election. But even if it didn't, it is still a problem that Republicans and Democrats should be able to come together and solve. Marco Rubio said during the campaign that in the next campaign it could be the Republicans that are the target of the Russian government or another government. Let's resolve to get to the bottom of this and stop these effects to meddle in the democratic process."