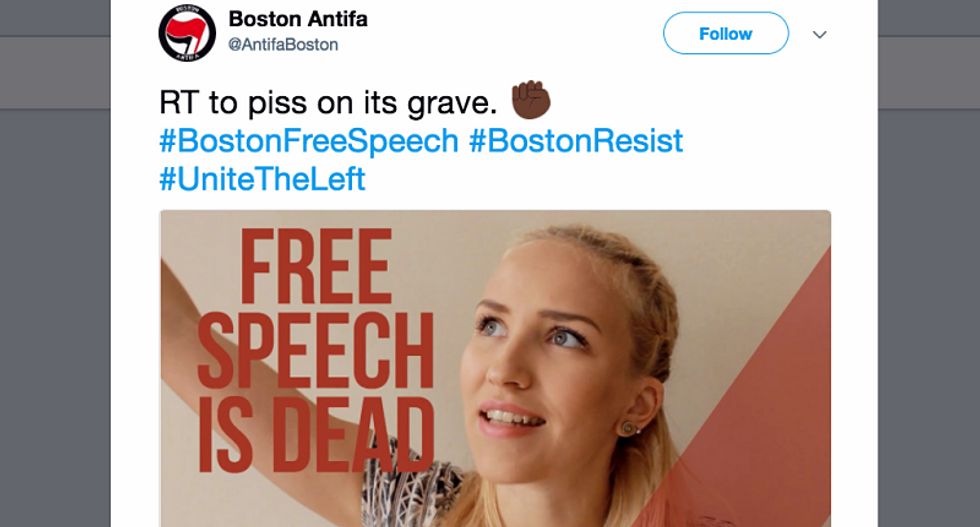 As conservatives seek to expose violent leftists in the wake of far-right violence in Charlottesville, Virginia, they keep on getting suckered by fake social media accounts created by their fellow right-wingers.

Seeking to portray the left as being comparatively as violent as the Alt-Right, conservatives have repeatedly lied to make the case. But the FBI noted in May that white supremacist extremists "were responsible for 49 homicides in 26 attacks from 2000 to 2016, more than any other domestic extremist movement." In the wake of Charlottesville, there has been a trend of conservative publications highlighting fake accounts.

"IJR editor Benny Johnson — who has been suspended at two different jobs for plagiarizing from sites including Yahoo Answers — fell for one of these accounts, @AntifaBoston. Johnson did not make any sort of attempt to verify the account’s legitimacy before publishing his piece, preferring to take the account at its word as “the official page for the Antifa organization in the Boston area.” (It’s clearly not)," New York Magazine explained. "Simple context clues reveal it as an exaggerated parody of left-wing sentiment."

The Independent Journal Review wasn't the only conservative publication to fall for the clearly fake accounts.

"Someone posing as a Boston antifa member (which again, doesn’t seem to exist in any publicly organized way) appeared on Fox News’ Watters’ World, baiting the host into asking immensely dumb questions like 'What about when an antifa member stabbed a police horse in the neck with a knife. Was the horse a racist Trump supporter?'” Gizmodo reports. "The troll alluded to right-wingers posing as antifa during the interview, and Watters was none the wiser."

It was just a few months ago when a right-wing activist literally shot himself in the foot after being suckered into thinking there would be an Antifa rally at Gettysburg.

"Right-wing counter protestors showed up and found no one to protest. Somehow, one of those fooled into traveling to Gettysburg managed to literally shoot himself in the foot," Gizmodo reminded. "Keep in mind, any of these accounts are blatantly fraudulent to anyone with a passing familiarity with right-wing talking points. But for people looking for a new strawman, the bare minimum of research doesn’t enter into the equation."

Below are a sampling of tweets from the fake account: