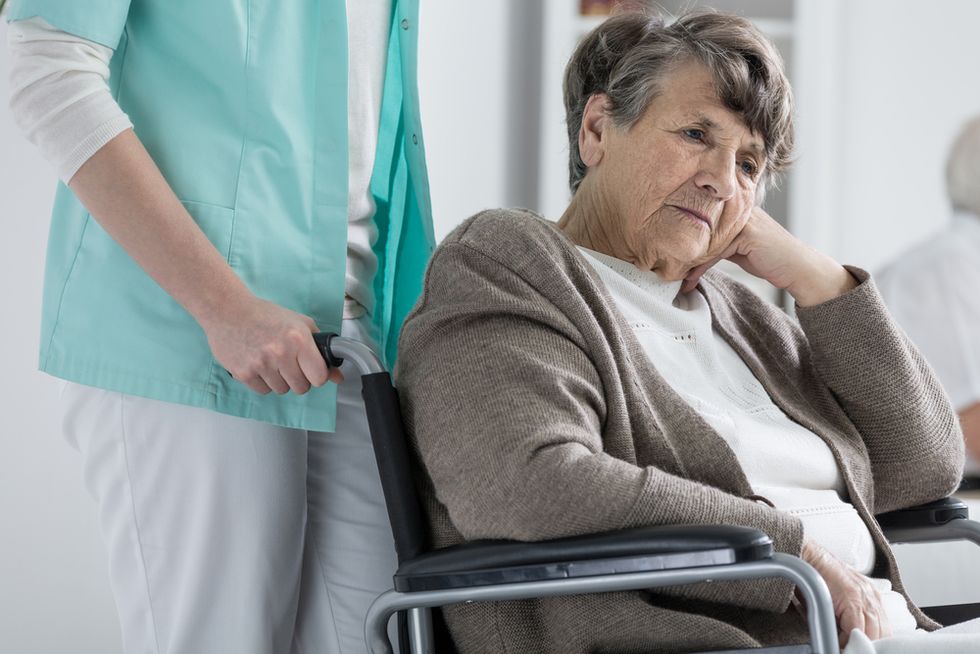 An elderly woman in a wheelchair looking somber (image via Shutterstock).

More than 75 consumer rights group have banded together to fight a Trump administration plan to strip residents of nursing homes that receive Medicare and Medicaid funding of their right to sue for abuse, neglect, sexual abuse and assault.

According to The Hill, the plan is intended to eliminate an Obama-era rule "that prohibited nursing homes that accept Medicare or Medicaid funds from including language in their resident contracts requiring that disputes be settled by a third party rather than a court."

The Centers for Medicare & Medicare Services (CMS) announced in June that it is considering doing away with the rule.

Consumer rights groups have formed the Fair Arbitration Now (FAN) Coalition to fight the new administration's attempt to strip away the right to take care facilities to court.

Remington Gregg -- counsel for civil justice and consumer rights at Public Citizen -- told The Hill that the rule change is "not only unnecessary, but shameful."

According to Gregg, the rule change will give care facilities and their lawyers undue power to fend off complaints and allegations by elderly residents.

“When you are trying to get someone in a nursing home, often time it's stressful or an emotional time. Often times loved ones can’t take care of themselves, so for a nursing home to say in order to get in you have to waive your right is shameful,” said Gregg.

“We’re talking about everything you may have a problem with – abuse, neglect, sexual assault, a wide variety of things – they are now saying you are waiving your right to full justice," he said.

The pro-business American Health Care Association (AHCA) and companies who own nursing homes have fought in court to strike down the Obama administration rule, arguing that the rule violates the Federal Arbitration Act.

The groups are joined by right-wing business group The U.S. Chamber of Commerce, which has fought the Obama-era rule since its inception.

The AARP -- which is one of the groups united under FAN -- released a statement slamming the proposed rule change that said, in part, "“To the extent that CMS may be relying on the authority to promulgate regulations ‘to promote the effective and efficient use of public moneys’ the regulations still need to be for the benefit of Medicare and Medicaid nursing facility residents and not to their detriment."

The question and answer period on the legislative change ends Monday.