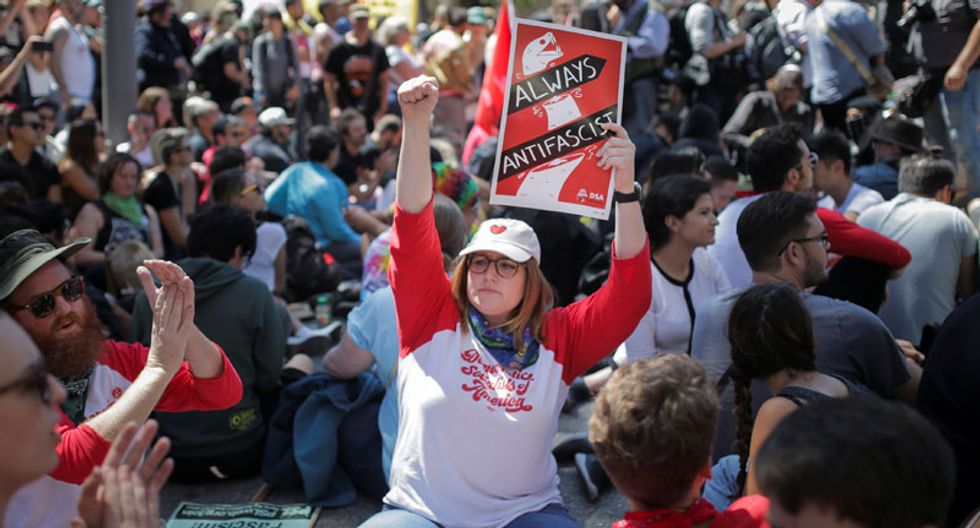 A woman holding an anti-fascist sign raises her fist while listening to a speaker at Alamo Square Park as part of a counter protest after a planned right-wing rally was cancelled in San Francisco, California, U.S. August 26, 2017. REUTERS/Elijah Nouvelage

Hundreds of counter-protesters gathered near a barricaded San Francisco park Saturday despite the cancellation of a free-speech rally that city leaders feared could draw right-wing extremists.

The planned gathering by Patriot Prayer had been the centerpiece of a weekend of protests in the Bay Area that had raised concern among police and elected officials two weeks after right-wing activists, including neo-Nazis and the Ku Klux Klan, fought with anti-racism protesters in the streets of Charlottesville, Virginia.

Patriot Prayer founder Joey Gibson, who has denied that his group is extremist or white nationalist, wrote on Facebook Saturday he would show up at random spots in the city to talk to residents. He apologized to supporters who came for the fizzled event.

"Basically everywhere we go, the police, the city, they want to shut it down," Gibson said in a video posted on Facebook.

San Francisco city officials including Mayor Ed Lee had lobbied the National Park Service to deny a permit for Patriot Prayer to hold its event at Crissy Field, which is under federal control as part of the Golden Gate National Recreation Area.

When that permit was granted on Wednesday, Lee told residents of San Francisco to essentially boycott the rally.

In nearby Berkeley, officials earlier in the week had denied a permit for conservative activists to hold a "No to Marxism" rally Sunday.

Also Saturday, an estimated 400 counter-demonstrators gathered in Knoxville, Tennessee to protest less than two dozen demonstrators at a white separatist rally at the Fort Sanders Confederate memorial, which some have called to remove, the Knoxville News-Sentinel reported.

Police officers and barricades separated the two sides. One organizer carried a sign reading, "Stand Against Leftist Hate" to the hisses and boos of counter-protesters, the paper reported. Photos showed them holding Confederate flags.

A woman who was not yet identified was arrested when she attempted to crash the counter-protester side late Saturday afternoon, according to local media.

(Reporting by Chris Kenning in Chicago; Editing by Lisa Shumaker)