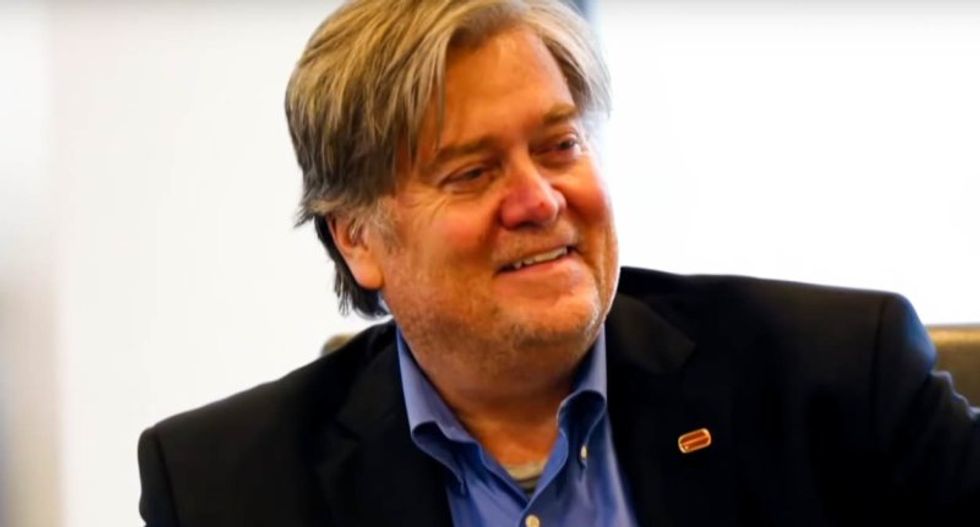 After a week in which President Trump repeatedly took the side of white supremacists defending the confederacy, the Friday dismissal of White House strategist Steve Bannon is likely to launch a new civil war within the Republican Party.

Bannon’s departure means the president has sided with Wall Street bankers, globalists who believe in pro-corporate trade agreements, libertarians who want federal regulation gutted and taxes cut—in short, the economic elites supported by the Koch brothers and Rupert Murdoch’s Fox News. This establishment side of the GOP was never at ease with stoking the far-right flames of white identity and economic nationalism Bannon brought to the Trump campaign a year ago, when Trump lagged behind in polls.

The evidence of the Republicans' big-money wing being pleased by Bannon’s leaving could be seen immediately, as the Dow Jones Industrial Average gained 60 points in the first 20 minutes after the announcement. There were numerous reports in recent days that Bannon was on the way out, especially after Trump dined with Fox News owner Rupert Murdoch in New York City recently and Murdoch said he had to go. The president reportedly vented about Bannon instead of defending his strategist.

But there’s more to this than the daily White House soap opera. Bannon was not just an idea person who encouraged Trump to stand with white supremacists in Charlottesville and deride those seeking to take down monuments celebrating slavery’s defenders. He was also an economic nationalist who saw China as a foe, not the friend to help defuse the North Korea crisis (in exchange for easing up on his tough talk on trade). Bannon wanted to raise income taxes on the very rich—stands cut from the same nativist cloth that was Trump’s bridge to the Tea Party, Freedom Caucus and Rust Belt voters.

Beyond these stances, Bannon ran the most powerful megaphone in Republican media in 2016. Breitbart News supplanted Fox News by Election Day 2016, which it attacked and saw as a competitor. Its vitriolic, propagandistic reports (including many based on information Russia pilfered from Democrats) was more influential than Murdoch's network. Bannon knew his White House days were numbered, felt liberated by it and was looking forward to returning to media warfare, according to a report on Axios. (Late Friday, Politico.com reported that Bannon was returning to Breitbart as executive chairman.)

“Bannon has felt liberated since it became clear he was being pushed out, according to friends. He’s told associates he has a ‘killing machine’ in Breitbart News,” Axios noted. “Steve Bannon’s next moves will be all about the billionaire Mercer family. I’m told Bannon, who visited New York this week, met with Bob Mercer and together they will be a well-funded force on the outside… A source familiar with Breitbart’s operations told me they would go ‘thermonuclear’ against ‘globalists’ that Bannon and his friends believe are ruining the Trump administration, and by extension, America.”

Seen in this light, Bannon deftly stage-managed his departure by eclipsing Trump’s high-voltage defense of white supremacists. Earlier this week, Bannon called Robert Kuttner, the editor of the American Prospect, a progressive publication, and gave an interview in which he referred to white power marchers as “clowns,” said Trump’s corporate advisers were “wetting themselves,” and—contrary to Trump’s statements—dismissed possible military action in North Korea. That move didn’t just hasten his departure, it signaled to Trump’s base that their voice in the White House was being exiled.

Whether Trump's White House can join the pro-corporate GOP mainstream is anybody’s guess. Trump’s association with Bannon, who became campaign CEO when Trump was down by double digits and who pushed Trump to hold more rallies and step up the attacks on Hillary Clinton, represented a bond between two men who clearly share instincts and values. Trump’s firing of Bannon is likely to haunt the White House. As ex-President Lyndon Johnson famously said of infamous FBI director J. Edgar Hoover, “It’s probably better to have him inside the tent pissing out, than outside the tent pissing in.”

“Conservatives from the Tea Party movement have viewed him as a crucial link to the White House,” the Wall Street Journal reported Friday. “Additionally, they worry about the president moving toward the political center without Mr. Bannon involved in policy fights, said a person with ties to conservative donors who support Mr. Bannon. ‘I see New York Democrats and generals in ascendancy, and that is not what we ran on in 2016,’ the person said. ‘So it worries me.’”

“Not what we ran on” is the key comment. Whatever Bannon is planning to do with the Mercers' support—including their investment house analytics that profile and predict behavior of social media users—is going to deepen the GOP’s divides. The biggest divides in American politics, left and right, are between the unruly and energized grassroots outsiders and the pro-corporate, establishment-defending insiders.

Bannon may feel he and Trump share the same values and would be loathe to personally attack him, as the Washington Post's Philip Bump suggests, arguing that others in Trump's orbit would be targeted. But that is a bit fanciful, as after a point you cannot separate the president from the institutional decisions that arise in a presidency. If anything, using Breitbart to press Trump's buttons or block his policies is going to get messy.

Partisan civil wars aren’t just fought with ballots in 2017; they’re fought with online platforms and emotionally provocative propaganda. As Bannon reportedly said, he has a “killing machine” at his disposal, and you can assume that its targets will be the disappointments surrounding the presidency, select Trump’s allies, and then establishment Democrats and progressives.

Bannon and his ilk are not about to allow the GOP to go quielty into the political mainstream.