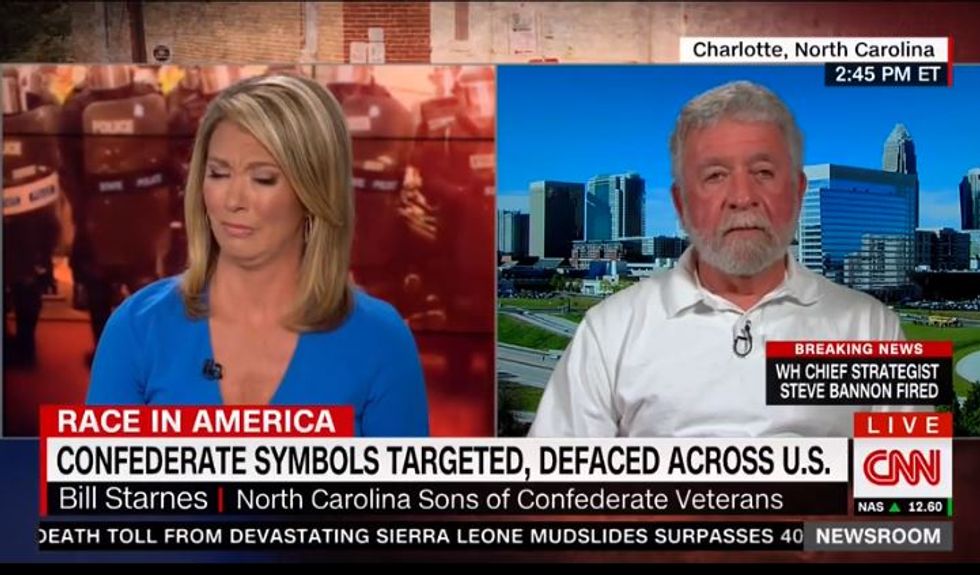 Bill Starnes, a member of the Confederate Sons of America, was defending the South's honor to host Brooke Baldwin one minute and, somehow, comparing Abraham Lincoln to Adolf Hitler the next.

"The pure fact is, Abraham Lincoln and Adolf Hitler have a lot more in common than Robert E. Lee and Adolf Hitler," Starnes said. "Robert E. Lee did not kill civilians. Abraham Lincoln did. The Union army came into the South and killed over 70,000 Southern civilians, men, women, and children, black and white, slave and free. So yeah, they did that."

"I don't think we wanna compare Adolf Hitler to Abraham Lincoln," Baldwin said as Starnes began packing his things up to leave.

Even Baldwin's other assembled panelists were dumbfounded by Starnes' comments.

"I was ready to talk to this gentleman about the pain of eras where people fight for the losing side and the lost cause and the fact that we don't hold every foot soldier responsible for the actions of their commanders," former Nixon library director Tim Natfali said. "But then he compared Abraham Lincoln to Adolf Hitler."

Earlier in the segment, after retorting that a historian who asserted that the Civil War was, indeed, about slavery "needs to actually study some history before he opens his mouth and says something that stupid," Starnes went on to criticize the host for not looking into the minutia of Congressional bills from the 1800s.

"As a fellow southerner, with all due respect," Baldwin responded, "I did do my homework and I did cite this so please, sir, don't tell me to do homework."

Watch the "Confederate son" melt down on television below, via CNN.

Member of the 'Sons of the Confederacy' goes... by sarahburris