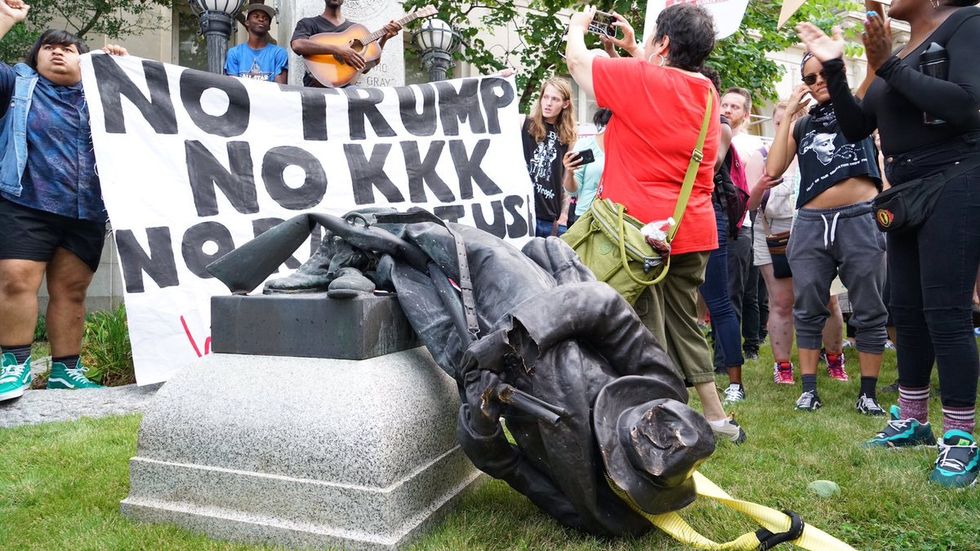 He might not have been at the Charlottesville rally, but yet another racist has been disgraced after being "outed" in the wake of the "Unite the Right" rally.

According to LawNewz, Magistrate Judge James A. Hinkle of Atlanta suburb Gwinnett County was suspended on Tuesday for a Facebook post comparing anti-racist protesters who tore down a Confederate monument in Durham, NC to ISIS.

"The nut cases tearing down Confederate monuments are equivalent to ISIS destroying history," Hinkle, who used to be mayor of Grayson, Georgia before becoming a magistrate judge, posted on Facebook Tuesday morning.

It wasn't his only inappropriate post -- he'd previously made a post saying those who oppose Confederate monuments should "get over" slavery.

"In Charlottesville everyone is upset over Robert E. Lee statute [sic]," Hinkle's post read. "It looks like all of the snowflakes have no concept of history. It is what it is. Get over it and move on. Leave history alone – those who ignore history are deemed [sic] to repeat the mistake of the past."

Following his ISIS post on Tuesday, Hinkle was suspended by Chief Magistrate Judge Kristina Hammer Blum, who told the Atlanta Journal-Constitution that her court does not tolerate judges who fail to "conduct themselves in a manner that promotes public confidence in the integrity, impartiality, and fairness of the judiciary."