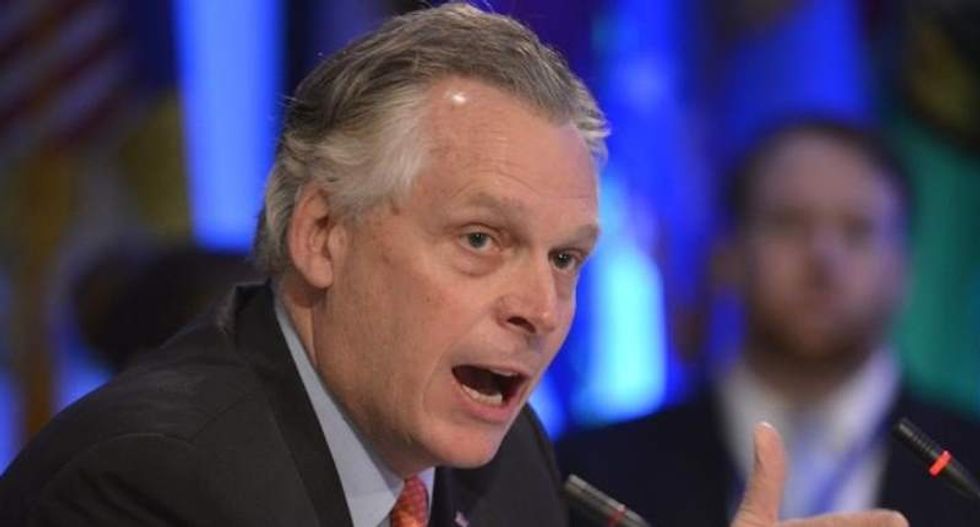 Gov. Terry McAuliffe (D) of Virginia makes remarks during a "Growth and Jobs in America" discussion at the National Governors Association Winter Meeting in Washington, on Feb. 23, 2014. (Reuters/Mike Theiler)

Virginia Governor Terry McAuliffe urged the Trump administration to exclude his state from a federal offshore oil and gas drilling plan, citing concerns about revenue sharing and environmental issues, in a letter that his office revealed on Thursday.

McAuliffe, a Democrat, had previously said that any federal drilling plan that includes his state must include a revenue-sharing program.

In the letter, dated Aug. 11 and sent to Kelly Hammerle, national program manager of the U.S. Bureau of Ocean Energy Management (BOEM), McAuliffe said he could not trust President Donald Trump, a Republican, to share revenues because he had proposed axing revenue sharing with Gulf Coast states where the drilling already occurs.

McAuliffe also said the Trump administration is working to cut funding "from the very agencies that would be charged with protecting Virginia's coastal environment in the event that exploration went forward."

The Atlantic Coast was not included in a 2017-2022 drilling plan finalized last year by former President Barack Obama after opposition from the East Coast governors, who feared that industrial development would harm seaside tourism. They cited a massive BP oil spill off the Gulf Coast in 2010 that hit revenues for tourism and fishing.

But in April Trump sought to open areas off the Atlantic, Pacific and Arctic oceans when he proposed a 2019-2024 National Outer Continental Shelf Oil and Gas Leasing Program by executive order. Trump has indicated he wants to make the United States "energy dominant" by maximizing output and exports of oil, gas and coal.

Drillers have supported Trump's potential expansion of oil and gas development. The International Association of Drilling Contractors on Thursday urged Interior Secretary Ryan Zinke "to expand access to available resources of the Outer Continental Shelf in order to further solidify energy security for the U.S. and future job creation and revenue generation."

Environmentalists opposed any expansion of drilling. Jacqueline Savitz, senior vice president for the U.S. at Oceana, a non-profit group focused on protecting and restoring oceans, said she hoped Trump would pull the Atlantic states out of the program. "The concern is if you drill, you'll spill," Savitz said.

BOEM said in a statement that it will "carefully consider the comments sent by Governor McAuliffe, as well as those received from a diverse set of stakeholders, including elected officials, government agencies, industry, public interest groups, and private citizens," as it prepares a draft program.