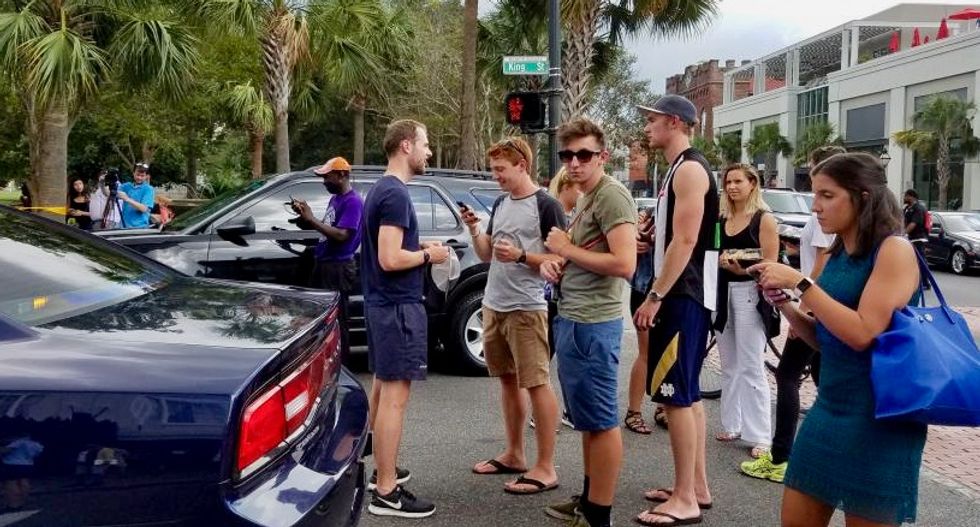 Bystanders wait at a perimeter set up by local police after reports of a man armed with a handgun was holding hostages at a restaurant in downtown Charleston, South Carolina, U.S., August 24, 2017. (Harriet McLeod Reuters)

A disgruntled employee who fatally shot one person and held another hostage on Thursday at a restaurant in downtown Charleston, South Carolina, was shot by police, the city's mayor said.

Witnesses said the gunman brandished a pistol and said "There's a new boss in town" as he entered Virginia's On King in the heart of the city's commercial district, while about 15 to 20 people were having lunch. Many of them fled.

The gunman was transported to a local hospital in critical condition and the hostage was rescued, said Charleston Mayor John Tecklenburg.

"A disgruntled employee came back to his place of employment... with a gun and killed an individual in the restaurant, held another hostage for some time," Tecklenburg told reporters at the scene.

"This was not a terrorist act. This was not a hate crime. This was a tragic case of a disgruntled individual, I think with a history of some mental health challenges, who took his anger into his own hands," he said.

Local television station WCSC-TV quoted a representative of the group that owns the restaurant as saying that one shooting victim was a chef and the gunman was a former dishwasher.

Police helicopters had buzzed overhead and police SWAT team members had closed several blocks of King Street, which is home to many restaurants, bars and boutiques and is popular with residents and tourists.

The local Post and Courier newspaper quoted a couple, Tom and Patsy Plant, who said they were eating lunch with their daughter Laura when the gunman walked in from the kitchen, the newspaper reported.

The Plants, who said they fled with other customers through a back door, described him as a black man in his late 50s. Patsy Plant told the paper he looked like "an ordinary grandpa, but he had a crazy look."

The restaurant is just a block and a half from the Emanuel African Methodist Episcopal Church, where on June 17, 2015, a white supremacist fatally shot nine members of a Bible study group in what officials called a racially motivated hate crime.

The church shooter, Dylann Roof, has been sentenced to death in federal court for the massacre. He pleaded guilty in April to separate state murder charges.

(Additional reporting and writing by Gina Cherelus in New York and Suzannah Gonzales in Chicago; editing by Dan Grebler)