Harvey moves into Louisiana with at least 35 dead, 17 missing 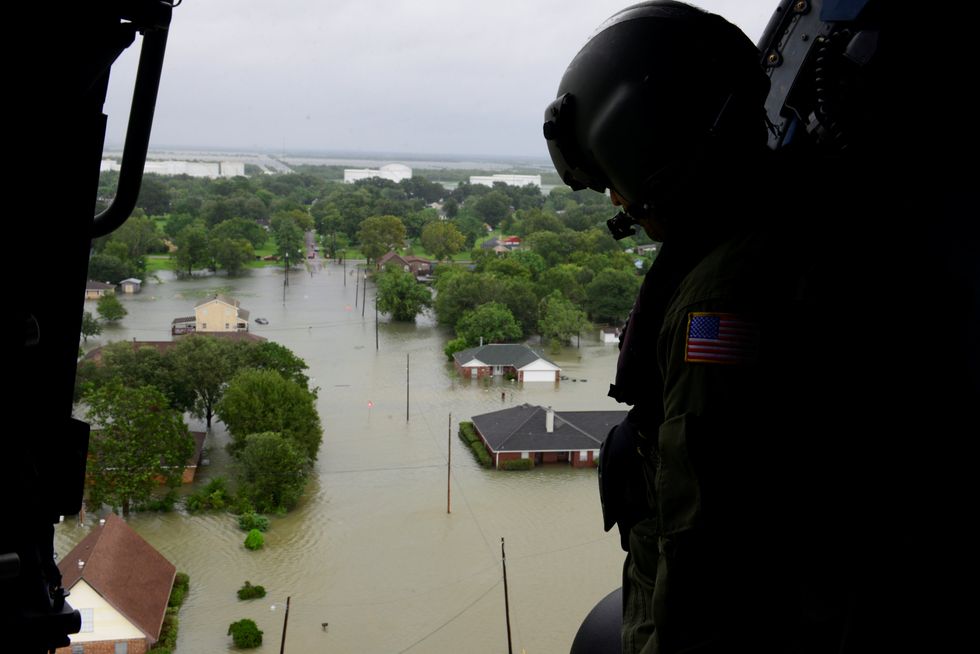 Tropical Storm Harvey spun across southeast Texas into Louisiana on Wednesday, sending more people fleeing for shelter after swamping Houston with record rains and flooding that killed at least 35 people and drove tens of thousands from their homes.

The storm has forced 32,000 people into shelters since coming ashore on Friday as the most powerful hurricane to hit Texas in half a century. On Wednesday, it pummeled the coast from Port Arthur, Texas, to Lake Charles, Louisiana. (GRAPHIC: Storms in the North Atlantic - http://tmsnrt.rs/2gcckz5)

Harvey weakened to a tropical depression on Wednesday night, the U.S. National Hurricane Center said, but warned that "catastrophic and life threatening flooding will continue in and around Houston, Beaumont/Port Arthur, eastward into southwest Louisiana for the rest of the week."

The latest reported deaths included a married couple who drowned while driving through high water near Simonton, Texas, Major Chad Norvell of the Fort Bend County Sheriff's Office said on Twitter. The Houston Chronicle identified the victims as Donald and Rochelle Rogers of Katy, Texas.

Houston's KHOU-TV said an infant girl was swept away after her parents got out of their pickup truck near New Waverly, Texas, and tried to carry her across rushing water.

Busloads of people fleeing floodwaters around Port Arthur arrived in Lake Charles, joining residents who had packed into shelters to escape waterlogged homes. About 250,000 homes and businesses were without power in Texas and Louisiana, figures from four utilities showed.

Harvey was forecast to drop a further 4 to 8 inches ( 10 to 20 cms) of rain on Wednesday, with a storm surge of up to 4 feet (1.2 m) along the western part of Louisiana's Gulf Coast, although the Houston area was finally expected to get a break, with no rain forecast for Thursday or Friday.

ANOTHER WEEK OF FLOODING

Moody's Analytics is estimating the economic cost from Harvey for southeast Texas at $51 billion to $75 billion, ranking it among the costliest storms in U.S. history.

At least $23 billion worth of property has been affected by flooding from Harvey just in parts of Texas' Harris and Galveston counties, a Reuters analysis of satellite imagery and property data showed.

"The worst is not yet over for southeast Texas, as far as the rain is concerned," Governor Greg Abbott said.

He warned residents of storm-hit areas to expect floodwaters to linger for up to a week and said the area affected was larger than that hit by 2005's Hurricane Katrina, which killed more than 1,800 people in New Orleans, and 2012's Superstorm Sandy, which killed 132 around New York and New Jersey.

Houston's metropolitan area, with an economy about as large as Argentina's, has a population of about 6.5 million, far greater than New Orleans' at the time of Katrina. Abbott asked that the federal government spend more on rebuilding Texas' Gulf Coast than it did after the earlier storms.

A day after visiting Texas to survey the damage, U.S. President Donald Trump pledged on Wednesday to stand by the people of Texas and Louisiana.

"We are here with you today ... and we will be with you every single day after to restore, recover and rebuild," he said during an appearance in Springfield, Missouri.

The storm made it less likely Trump would act on his threat to shut the federal government over funding for a border wall with Mexico, Goldman Sachs economists said. They now estimate that probability at 35 percent, down from 50 percent previously.

Vice President Mike Pence and several Cabinet secretaries will travel to Texas on Thursday to meet residents affected by the storm as well as local and state officials, Pence's press secretary said.

Clear skies in Houston on Wednesday brought relief to the energy hub and fourth-largest U.S. city after five days of catastrophic downpours. The first flight out of Houston since the storm hit had boarded, city officials said on Wednesday evening. Mayor Sylvester Turner said he hoped the port of Houston would reopen soon.

But disruptions lingered and even some of the people helping evacuees in Houston said they had lost their homes.

A shelter in Lake Charles was bracing for about 1,500 people rescued from floods by the U.S. Coast Guard, said Angela Jouett, who is running the shelter.

Among them was Jacelyn Alexander, 41, who flagged a rescue boat and escaped after being woken at 4 a.m. by a neighbor who warned their Orange, Texas, apartment complex was flooding.

"I can't move. I'm wet and tired. I'm trying to find my family," said Alexander, who last spoke to her parents by telephone early in the morning, when her father told her he had declined a rescue.

Disputes flared at some shelters, with at least one arrest reported.

Harvey made landfall for a third time early on Wednesday, and was about 50 miles (80 km) north of Lake Charles, near the Texas border at 4 p.m. CDT (2100 GMT), the U.S. National Hurricane Center said.

Texas officials said close to 49,000 homes had suffered flood damage, with more than 1,000 destroyed. About 195,000 people have begun the process of seeking federal help, FEMA said.