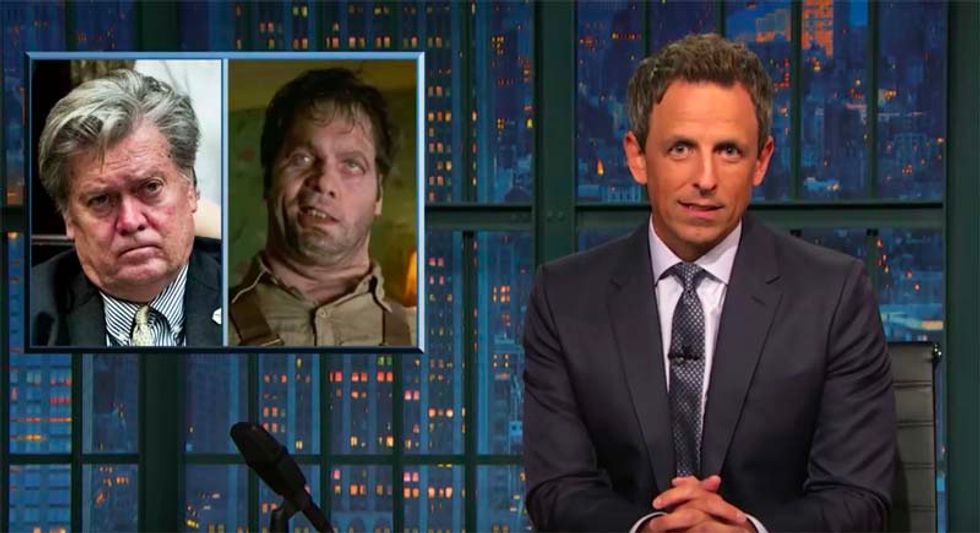 NBC Late Night host Seth Meyers took some shots at White House strategist Steve Bannon who gave a rare interview earlier in the week expressing "glee" that the country is in a furor over the neo-Nazi march in Charlottesville last weekend.

"Not all of Trump's aides and allies tried to distance themselves after his unhinged press conference, "Meyers began. "There is also Trump's chief strategist, Steve Bannon, whose ties to white nationalists are well known. Which is odd because no one disproves white people are a master race more than Steve Bannon."

Posting a picture of the White House adviser, Meyers, quipped, "Look at him. If he tried to throw a Nazi salute he'd throw his back out. He looks like the discarded skin suit used by the alien in 'Men in Black.'"

Meyers went on to note that Bannon claims that his White House rivals are "wetting themselves" over Trump's disastrous presidency, pointing out, "You'd wet yourself too if you saw Steve Bannon. He's the guy you see in the mirror when you close the medicine cabinet."