'He should be the one to lead on this': Dem lawmaker blisters Trump for standing by while Charlottesville explodes 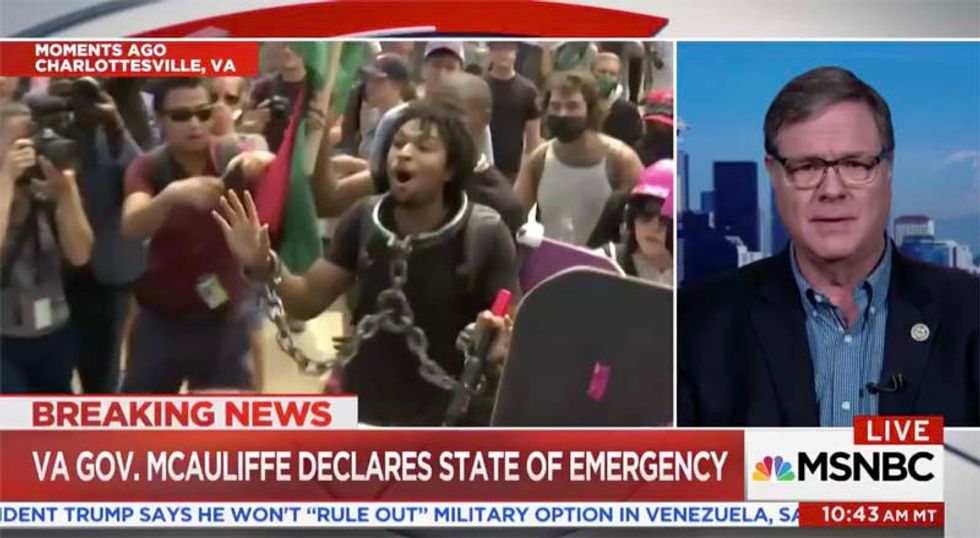 Speaking with host Alex Witt, Rep. Denny Heck (D-WA), lashed out at the president for remaining silent and at Chief of Staff John Kelly for letting him remain so.

Trump, who later tweeted out a condemnation of the "hate,"  was late to the party as Heck noted after Witt pointed out that First Lady Melania Trump beat the president to the punch.

"I definitely think he should have been the one to lead on this," Heck explained. "Her statement as far as it goes is fine and well received and I appreciate it, but this country needs to hear from the highest elected official in the land and that's President Donald J. Trump, period, full stop."

"Alex, it was just a couple of weeks ago that General Kelly was brought in to be chief of staff to bring some order out of chaos, hopefully calm the almost random nonstop tweet-storms," Heck continued. "He didn't do very well at that. But right now, right now, right at this moment, both Chief of Staff General Kelly and the president have a golden opportunity not just to come out and openly condemn this violence, but to take a specific and concrete action, and that is to fire Steve Bannon."

"And, to paraphrase what the president said about how police should put suspects into cars, a statement that I strongly condemn, when he fires Steve Bannon, I don't think he should be too nice about it," Heck bluntly stated.