Here's what the Confederate flag means to southerners -- according to science 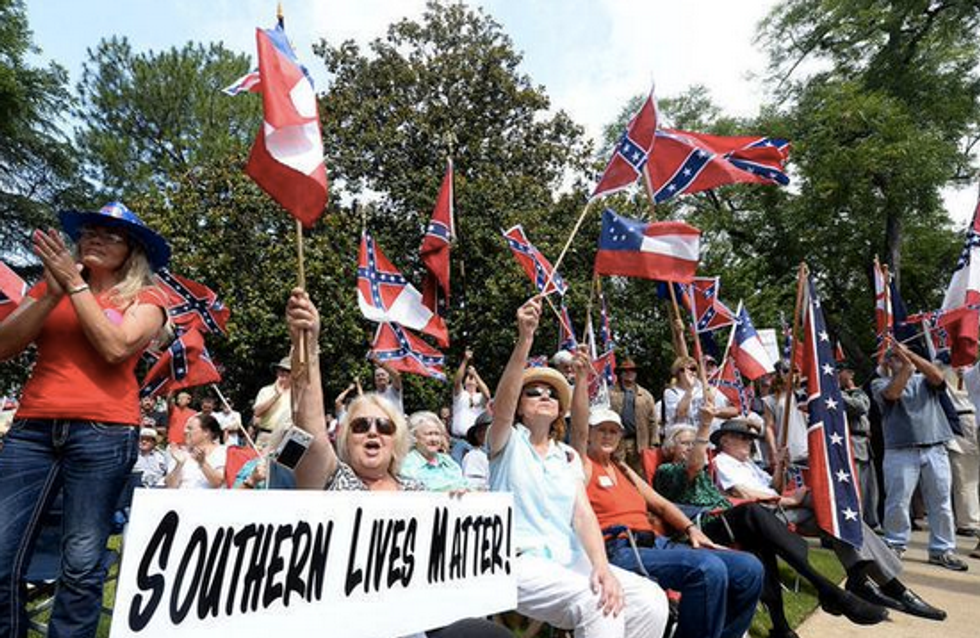 The Confederate Army battle flag is without a doubt one of the most controversial symbols in American history. While some claim that it’s simply a racially neutral symbol of Southern heritage, others see it as a hateful sign that’s essentially a coded stamp of approval for slavery.

Despite the fact that the Civil War ended over a century and a half ago, the flag is still commonly seen on car bumper stickers, hats and house porches all over the country — but most commonly in rural areas in the South. While the Confederate flag phenomenon is certainly nothing new, its prevalence has become even more salient in the minds of Americans due to recent events, such as the string of questionable killings of unarmed blacks by police and the flourishing nationalist movement catalyzed by nation’s president. As such, the debate over the flag’s true meaning, and whether its display should be allowed, is more heated than ever. Unfortunately, without any current quantitative data on the subject, there has been little progress in the discussion over the true motivation of Confederate flag bearers.

Psychology researchers at the University of Western Ontario decided to shine some light on the subject with a controlled study and empirical measures. Their results, which were recently published in the Journal of Social and Political Psychology, show that the answer to what the flag means to southerners is quite complex, with a little truth to both sides of the story. While their findings support the idea that the majority of southerners who have a positive view of the flag do not display blatant negative racial attitudes toward blacks, analyses showed that a quite significant portion of flag supporters are motivated by racism and a belief in white supremacy.

The researchers used online surveys through Amazon’s Mechanical Turk to collect data from 526 adults (417 whites and 108 blacks) from the Southern United States. Georgia, South Carolina and Mississippi were chosen as locations because of their large percentage of African Americans (approximately 40 percent) and well-established controversy over the Confederate symbol in the recent past.

Participants filled out questionnaires designed to assess their political ideology, racial attitudes, and attitudes toward the flag. Since it is not uncommon for people to lie on surveys when they think they could be judged negatively for their controversial opinion, the researchers gave additional questionnaires that measured “motivation to control prejudice” and “social desirability,” which allowed them to control for such data-skewing effects.

Statistical analyses showed that among the white sample, positive views of the Confederate flag were most strongly correlated with greater political conservatism and Southern pride, but still significantly related to negative attitudes toward blacks, and lower motivation to control prejudice. As one might expect, the vast majority of blacks had negative attitudes toward the flag, but, perhaps surprisingly, 7.3 percent actually held positive views of it — although the findings are inconclusive as to why.

Counter to the widely held belief that general supporters of the Confederate flag are motivated by blatant racism, the findings suggest that the majority of flag supporters, labeled here as traditionalists, see it as a symbol of heritage and not hate. However, the data clearly show that there is still a significant portion of flag bearers who do in fact hold strong racist views that they are trying to express symbolically.

These findings have important political and legal implications regarding the controversy over whether Confederate symbols should continue to be displayed on official government buildings and grounds. It has been argued that flags should be removed because they are intended to inflame race relations and are therefore direct violations of the equal protection clause of the 14th Amendment.

While the authors conclude that their results do not support the common assumption that the Confederate flag is generally a symbol with racist intent, this does not seem to be a particularly persuasive argument for allowing it to remain displayed in at official institutions. Given that the findings show that a significant amount of people still use the flag as a symbol of white supremacy and black oppression, it does not seem appropriate to use the study’s findings as justification for the flag’s display. It is important to note that this study did not take into account the potential negative psychological effect the symbol has on blacks and anyone else who can’t ignore its historical role.

However, these results should help restrain the inaccurate stereotype that all Confederate flag supporters are racists or white supremacists. Apparently, the majority of them do in fact regard it as merely a symbol of pride and heritage, and that should be acknowledged by the public. At the same time, one can’t help but wonder why these non-bigoted flag bearers don’t just create a new symbol that represents the modern South rather than the one that fought to keep slavery.